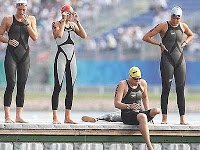 Last year among a prestigious black-tie audience and in front of some of the greatest athletes in history, Olympian Natalie du Toit was awarded the Laureus World Sportsperson of the Year with a Disability. She was given the award for breaking down the barriers between disabled and able-bodied athletes.

Natalie has broken down barriers like no one else before. On her way back from a training session on her motorbike, she was hit by a car and lost her leg in a tragic accident.

But her focus, passion and enthusiasm for sports and life remained. She spent untold hours, days, weeks, months and years – quietly and diligently regaining her world-class athletic pedigree. She did not complain. She did not point fingers. She did not give excuses. She just set about realizing her goals on a day-by-day basis.

One of her goals was realized in Seville, Spain where she qualified for the Olympic 10K Marathon Swim final with a ‘perfect race’ as she describes it. Walking to the warm-up area with a prosthetic leg, balancing on one leg on the starting pontoon and swimming with an imbalanced stroke, her incredible effort brought tears to the eyes of many who witnessed her courageous swim. Dial forward to Beijing where she hit the first turn buoy and lost her swim cap, she AGAIN faced adversity. Despite falling behind the lead pack, she swam on, figuratively, upstream. She swam right past the feeding stations and ignored the pain as she picked off some of the fastest swimmers in the world to finish 16th in the Olympic 10K Marathon Swim. A disappointing swim for someone with higher goals, but one of the most amazing comeback stories of all time.

And her story continues, making waves and making history. She remains the humble, warm-hearted, compassionate … and fearless … young lady that she has always been. Her sights are now on the 2012 London Olympics and Paralympics where she will play double-duty as a world-class open water swimmer and pool Paralympian.

Her backbone, her nature and her achievements are something to behold. WOWSA Live welcomes one of the finest athletes and persons in the world, Natalie du Toit.

Photo is from the 2008 Beijing Olympic 10K Marathon Swim start.