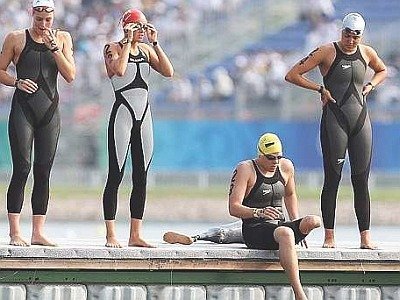 In a thought-provoking article here on Paralympic athletes, Mike McNamee, Professor of Applied Ethics at Swansea University Wales, talked about the ethical challenges and opportunities that the International Paralympic Committee faces.

Read his comments here that included this question: “If there were more people like…Natalie du Toit, who [has] participated at an elite level in both disabled and able-bodied sports, what would that do to the Paralympic Movement? Would it somehow devalue it or degrade it? Would other athletes with disabilities still want to compete against them?”

We have also heard about people who complain about Natalie‘s participation in Paralympic competitions, which she has every right to do because she is an amputee. But it appears that some individuals believe that her ability to compete with world-class able-bodied athletes is reason to prevent her from competing against other disabled athletes.

Yet, her story is so inspirational and touching. To listen to Natalie‘s plight and situation after her leg was amputated is an honor. She had to learn balance all over again, both on land and in the water. She had to learn how to breathe again without turning over. She has to do flip turns with one leg. She had to re-learn everything about how to swim; every motion in her arms, legs, torso and head had to be re-thought and modified because of her physical change.

And it still remains very difficult for her to maintain balance in the open water, especially when swimming in a pack. When she is hit or bumped on her leg, body or arms, it causes her to turn over and requires tremendous effort to regain a streamlined balance. That is all valuable time lost.

She is also handicapped because of her lack of ambidexterity that every other elite swimmer has (i.e., the ability to breathe both left and right and immediately veer to both the left and right without any degradation of speed). Her handicap is truly a physical disadvantage that requires her to change her tactics depending on her positioning in the race relative to the course and her most aggressive competitors. She also has the inability to fight off those physically aggressive competitors (or those who simply bump into her inadvertently); for it she retaliates in any way, it negatively affects her balance and performance more than anything.

It still remains impossible for her to feed like any able-bodied swimmer at the feeding stations where they can grab their water bottles and gel packs and down them in a few seconds. Once she goes vertical in the water, even more time is lost as she attempts to get re-started.

And, incredible as it sounds, she occasionally has to get special permission from race directors and volunteers to bring her prosthetic leg down to the starting area. And sometimes this permission is not easily granted.

The fact that she overcomes these handicaps – and more importantly, never complains about them or brings them up as a reason why she does not perform well – is a credit to the heart and soul of this incredible woman.

So if we were to answer the professor’s first question above, “If there were more people like…Natalie du Toit, who [has] participated at an elite level in both disabled and able-bodied sports, what would that do to the Paralympic Movement? Would it somehow devalue it or degrade it?”, our immediate thoughts are the following:

Natalie‘s participation most certainly does not devalue or degrade any athlete, movement, sport or event. She does not use any prosthetic to gain any advantage and, especially in the elite levels of open water swimming, faces tremendous disadvantages because of her handicap. We should celebrate and learn from her participation at any level.

At the world-class level, we look at her commitment and competitiveness in awe. At the Paralympic level, we similarly admire her level of athleticism and achievement as we do with her fellow competitors. The fact that they are in the field of play is a testament to their resolve and character.

So instead of talking about devaluing or degrading anything or anyone, Natalie’s performances at all levels do the exact opposite. She elevates the movement. She embodies the beauty and challenge of athletic performance. But even more so, her performances are a celebration of the human spirit to overcome adversity.

Deep within herself, she knows the day-to-day difficulties she faced in order to get from seeing her leg being crushed in a terrible accident on a city street to standing literally and figuratively toe-to-toe with the world’s best open water athletes. Could we do the same? Do we have the same fortitude and outlook in life?

She is an incredibly brave, humble human being, a champion like her colleagues in both the Olympic and Paralympic movements. We look up to her and them with the greatest respect.

In summary, every competition is elevated with her presence and participation.

Photo above shows Natalie du Toit on the starting pontoon minutes before the start of the Olympic 10K Marathon Swim at the 2008 Beijing Olympics.