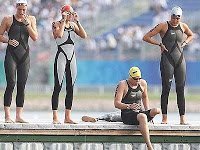 The Profile of Natalie du Toit was recognized by the International Olympic Committee (IOC) as one of the best television images of the summer and winter Olympic Games back in 2008.

And the recognitions for her achievements, mindset and lifestyle continue.

In fact, in retirement, her achievements are looked upon with even greater awe.

South African swimming heroine du Toit will receive an honorary MBE (Member of the Most Excellent Order of the British Empire). “I find myself extremely humbled and honoured to be receiving this auspicious award. To those that have made it possible, I thank you for believing in me and by having stayed by my side.”

British Acting High Commissioner Martin Reynolds said, “Natalie has achieved great success in her sport, demonstrating an ability to compete with the best in both Olympic and Paralympic disciplines at numerous international sporting events. Natalie is an inspiration to up and coming athletes throughout the world and I am delighted she has been recognised for her achievements.”

Photo by Pei Qingsheng of Natalie du Toit preparing for the start of the Olympic 10K Marathon Swim at the 2008 Beijing Olympics with her competitors beside her.

What is amazing about the photo above is that the officials did not want to allow du Toit to walk out to the starting pontoon with her artificial leg. What is not surprising is that du Toit was willing to do so even if it would have created a disadvantage for her and that her fellow competitors came to her side and thought the official’s decision was not right. Eventually, the official backed down and allowed du Toit to use her artificial leg to walk out with the rest of the field.

Du Toit was presented with the award by Prince Edward, His Royal Highness The Earl of Wessex at a ceremony in Pretoria, South Africa in October