The Spanish town of Navia, site of one of the world’s greatest open water swims that has been going on uninterrupted for 53 years, will expand its events in 2011.

Navia has been designated by the European Swimming League (LEN) to host the 2011 European Open Water Swimming Junior Championships. 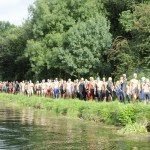 The event is part of a three-day competition with a 5K race on August 12th, a 3 x 3K time trial by national teams and the 13th Asturias Cup on August 13th and the 54th Descenso a Nado de la Ría de Navia on August 14th.

In this Team Pursuit race, three swimmers (at least one per gender) per country compete and swim together in an aquatic peloton. 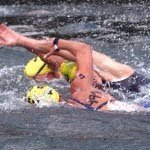 Ignacio Martínez Sela writes about both the individual and Team Pursuit races, “The British National Team truly stands as the one of the favorites in both individual events as in the team event. Russia and Italy tend to surround the podium next to the British Team. However, the Junior Spanish Team has the incentive to swim at home in front of a local crowd where 75 swimmers between the ages of 16 and 19 from 15 nations are expected to compete.”

Additionally, the traditional Navia event – the 13th Asturias Cup – will also be held with the culmination of the weekend with the 54th Descenso a Nado de la Ría de Navia that will be televised live by Televisión del Principado de Asturias (TPA).

The Friends of the Navia River Association has organized 53 uninterrupted editions of the Descenso a Nado de la Ría de Navia and 2011 looks to become even bigger and better.

Footage below is from Televisión del Principado de Asturias (TPA)


Presentacion LIII Descenso Internacional a la Ria de Navia by
TV-EONAVIEGA – watch the exciting finish to the men’s elite race in 2010 about 15 minutes into the video above.