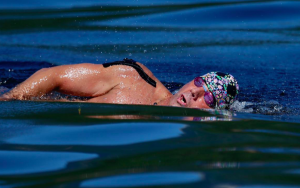 Photo courtesy of Keith Currie, Priest Lake, Idaho. Ned Hastings calls himself an open water swimming enthusiast and a cold water swimming partaker.  But he was not always self-defined in such a way. The 54-year-old was a competitive swimmer in his youth, but it was not until a friend, Sean McGrath (aka H2O Bro) asked him to be his swim buddy did he try open water swimming in the nearby Columbia River. He was quickly hooked.  “[Open water swimming] really turned into a Zen thing, a spiritual thing,” he recalled to Eli Francovich of The Spokesman Review. Hastings transformed his new passion into plans to swim across the length of Upper Priest Lake and Priest Lake.  His original plan was set for 2018, but a local wildfire prevented him for an attempt.   He waited, re-assessed and trained for an entire year. On July 21st, he finally set off from Navigational Campground at the northern end of Upper Priest Lake and headed to Coolin, Idaho at an elevation is 2,490 feet (760m) above sea level. On a smooth day, Hastings completed the unprecedented 14 hour 24 minute swim the lakes. Hastings later wrote about his successful record-setting swim recognized by the Marathon Swimmers Federation, “I am humbled, a little embarrassed, and very grateful.  I am humbled by how incredibly difficult it was to swim upper and lower Priest Lake.  My throat hurt from breathing, my shoulders and arms felt like hamburger, my calves were always threatening to cramp, and I was cold.  I was cold even though the water was 68°F to 70°F.  This swim took all my will power and guts to finish.  I had great conditions and it was hard.  I am grateful for the incredible support I got from my support crew: Roger, Damon Traeger, Mike, and Mel Kulp, and the special time we got to share.  I am also grateful to the wonderful people of Priest Lake who cheered me on.  It is very flattering.”  Copyright © 2008 – 2019 by World Open Water Swimming Association