But Eilis Burns wisely stepped in.

“Originally, I didn’t plan to attend the ceremony at the International Swimming Hall of Fame,” explained Denison.

“I was there in 2010 for the induction speech of King Kevin Murphy, in front of nearly 1,000+ attendees including Michael Phelps, Greg Louganis, Rowdy Gaines, Donna de Varona and other pool superstars and Penny Palfrey‘s induction into the International Marathon Swimming Hall of Fame. So, I sort have “had done that”. Also my plan was to swim 4 marathons in 4 days in Arizona at S.C.A.R. Swim Challenge the week before. Staying another week in the USA was going to kill my annual holiday allocation.

A few weeks before the event my smart coach, Eilis Burns, said to me, ‘Your chances of EVER receiving another award by the International Swimming Hall of Fame in Florida are exactly zero. Stop being an eejit [Irish for idiot] and go.’ So, taking orders from the Coach as usual, I changed my plans.”

So among those giants in the aquatics world, Denison was feted at the Hall of Fame for his contributions to marathon swimming.

Thank you to the New England Marathon Swimming Association for establishing this Memorial Award. As a native Vermonter, it has a very special significance.

Thank you to the International Marathon Swimming Hall of Fame for the nomination.

Thank you to the swimmers and volunteers in Ireland who accepted me into their community in 2001 and gave my ideas and leadership a chance.

Finally thank you to the International Swimming Hall of Fame for this incredible honor.

I look back with pride.

Country Cork in Ireland with a population of less than 500,000 (three times that of Ft Lauderdale) burst onto the marathon swimming scene 8 years ago. In that short time, our swimmers have logged nearly 200 marathon swims including the first Oceans Seven, 3 Triple Crowns, 1 over and back English Channel and 20 English Channel solo swims. I think besides a training squad in Dover, our location accounted for the second most English Channel swimmers over these years.

In addition, we host an annual non-profit Distance Training Week in Cork. It is the longest, coldest and toughest event of its type in the world. Nearly 250 swimmers have attended from all over the world with more than 50 English Channel successes

How long will your marathon swim take? That depends on the weather and water conditions but most swimmers think it will take less time than it actually will. So – our distance week takes nine days – not seven.

How tough? Twice a day open water swims in lakes, rivers and the sea for the first 7 days. Day 8 is a torture swim: show up, shut up and be mentally and physically tortured over a period of 3 to 7+ hours. Every effort is made to destroy the swimmer’s resolve and confidence because that same swimmer can miss the Cap in France by 1 meter and face 5 or more hours of adverse currents.and our torture swim may be their only practice. Then, on day 9, the very tired swimmers do a 6 hour swim to qualify for the channel. Except our swimmers are probably swimming the last 6 hours of their next marathon.

I look forward with pride – in June we’ll cheer the next 3 swimmers 28.5 miles around Manhattan Island and then 50 plus arrive for the Distance Week.

Thank you again for this honor and wonderful reception…and just one final note. None of the Cork swimmers were champion pool swimmers. Most were between 30 and 50 years of age when they adopted a goal – to complete a marathon swim. If any of you are looking for a goal – come and see me. 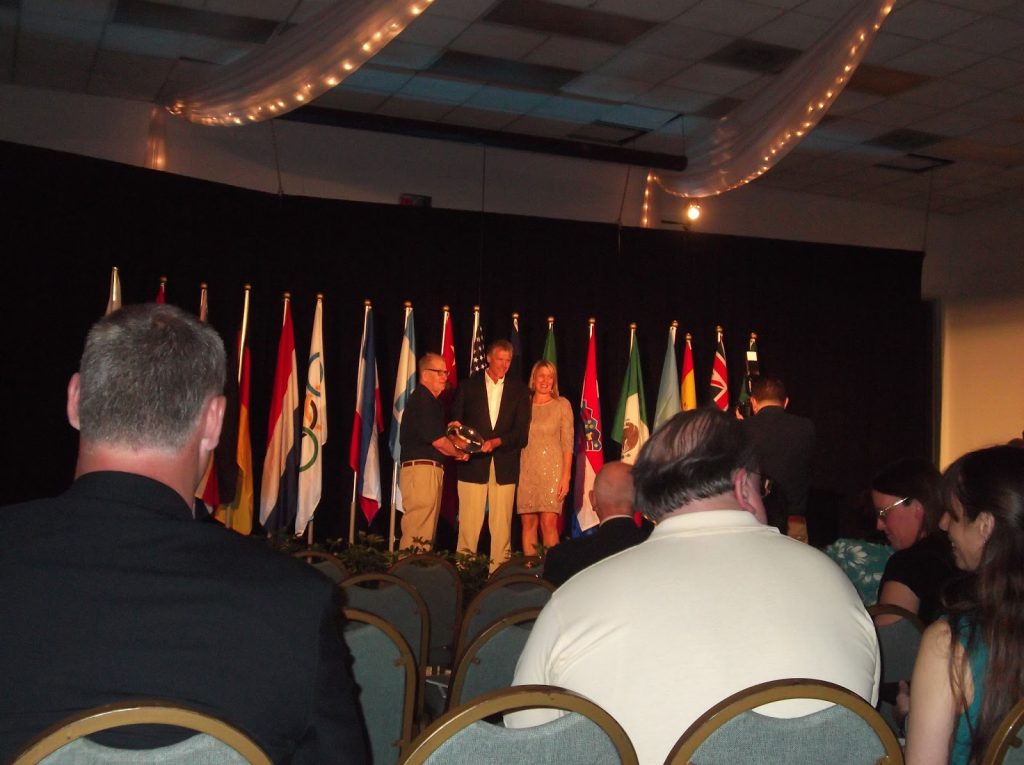 “Thinking about it later, it would have been very poor to not represent open water, the International Marathon Swimming Hall of Fame, and Ireland at the event. I was far more nervous giving a short speech than I anticipated and very humbled by the whole experience.

The final cool thing was sitting behind 5-time Olympic medalist John Naber and being congratulated later by Klaus Dibiasi, the Italian diver who won Olympic silver in 1964 and then 3 gold medalis in 1968, 1972 and 1976. I grew up watching him on TV
.”