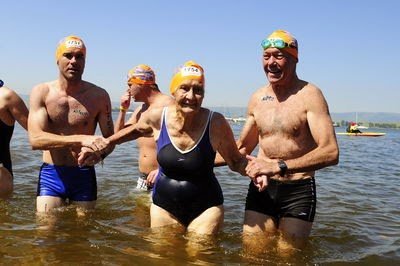 Lots of athletes experience peaks in their athletic careers in high school. Others peak in their university years and a select few continue on to peak at World Championships, the Olympics or as professional athletes.

The life of a competitive athlete can be fleeting and is largely confined to those in their teenage years and their young adulthood.

Swimmers like Thomas Lurz, Petar Stoychev, Poliana Okimoto, Angela Maurer and others peak start peaking in the late 20s and continue to be world-class into their 30s.

And then there are marathon swimmers and channel swimmers who start to peak even later on in life…in their 40s like Tomi Stefanovski, in their 50s like Elizabeth Fry, in their 60s like David Yudovin, in their 70s like Dr. Otto Thaning, in their 80s like Mally Richards, and in their 90s like Lorna Cochran.

Even when the 250 inductees in the International Marathon Swimming Hall of Fame are considered, there are still many who are active and doing open water swims in their post-Hall of Fame retirement.

In the open water world, the second half can be the better half.