British English Channel swimmer Neil Brinkworth recalls his achievement near his hometown of Plymouth, “The Eddystone Lighthouse has always captured my imagination since I was a small boy.

I have lived in Plymouth all my life and there is a particular spot in Plymouth where you can look across the city and out to sea; on a clear day you can see the Eddystone Lighthouse.

As a child, I use to fantasize about the lighthouse, what it was like out there and my father use to tell me tales of he and his friends jumping off the stump of the old lighthouse into the sea, when they use to go diving on the Eddystone reef. I loved to hear the stories about the old ship wrecks. My imagination would be captured and I would dream about swimming to and from the lighthouse.

Fast forward about 40 years, along with my passion for open water swimming, I realised that my childhood dream could come true, with some planning. Lewis Pugh said it takes one person to unlock a dream. I think my dream was unlocked when I had the opportunity to swim with Lewis Pugh on a leg of his Long Swim; we passed the Eddystone and I remember saying to myself, once I’ve swum the English Channel, I am going to swim the Eddystone.

With a lot of hard work and planning, overcoming many set backs and disappointments, I eventually managed to get the right people together, I was able to make my childhood dream reality on 8th September 2020 and showcase Plymouth as the amazing city I live in, as a future hub for long distance open water swimming.

The morning of the swim was amazing, I jumped into the car and I couldn’t believe that I only had to travel 20 mins to the marina and I was about to swim from the Eddystone lighthouse back to Plymouth Hoe. To think that so few people had successfully completed this swim before me, and I was going to end up being the first person in over 30 years, (the first person in the 21st century) to be attempting it gave me goosebumps.

The boat ride out to the lighthouse was exhilarating; the twin hulled catamaran that I chartered as my support boat sped through the swell and at times took off through the waves in the darkness, which was incredible.

I was running on nervous energy and tense with anticipation as to what lay ahead at the start of the swim: getting into the turbulent sea, in the darkness, below the looming lighthouse was really surreal. I remember somebody saying to me, ‘You must touch a rock.’ I was thinking, are you for real, I can’t see the rocks, as it was pitch black and the waves/swell was breaking over them.

When I jumped off the boat, my whole body tensed up and I began to hyperventilate; why, I don’t know, but I kept talking to myself, ‘Calm it down, take it easy.’ I lifted my goggles to get a better view of where I could swim to so I could touch the rocks. I spotted a wedged shaped rock- that was the rock I was going to swim to. I clambered onto it and shouted back to my crew, ‘I’m touching the rocks.’ If a wave was to pick me up it would wash me over that rock, unlike the other rocks where I would just be smashed against them. My plan worked, I managed to get onto the rock and shouted back to the crew, ‘I’m on the rock’, I repeated it, and then I started swimming!

As with all my swims, it usually takes me just over an hour to feel comfortable and settled, the usual stop to adjust the hat and goggles is normal. I can never rush my swims, I have to wait to let my pace come to me. Once I’ve settled down I’m fine, this swim was no different. All the tension and anticipation from the organisation and preparation slowly started to slip away, I was doing the swim I always had dreamt about…even before I contemplated swimming the English Channel.

In what seemed no time at all I received my first feed, by which time it was starting to get light. The feeds kept coming, regular as clockwork, as I had planned and with only 100s and 100s of comb jellies to keep me company, I just kept swimming. Then I caught my first glimpse of land, that welcome site all swimmers long for, Rame Head, the first noticeable land feature. I knew where I was and what was coming and the different landmarks along the way.

The swim was going to plan, I could tell I was on the course we had plotted. I was ecstatic, I knew this stretch of coastline well and knew what to expect. The closer I got to my Penlee Point I knew I would start to encounter the tidal flow of the ebb tide leaving Plymouth. I could tell from landmarks along the coastline that I was slowing down and probably swimming against the tide. But worse was to come; I was going to enter Plymouth Sound on an out going tide, that meant slow hard progress, I would just have to be patient and keep swimming.

I was mentally ticking off milestones in my head, the two headlands opened up to present Plymouth Sound and the Breakwater lighthouse, I got my head down as I knew once inside the Sound I was about an hour from landing at Plymouth Hoe. But the lighthouse on the end of the breakwater didn’t get any closer. I took another feed and thought to myself that would be my last feed. How wrong was I, after another 45 minutes of swimming I made slow progress to the lighthouse. I took another feed and carried on swimming.

It’s amazing what goes through your head when you are swimming. I sometimes get fixated on food; I knew there were homemade sausage rolls in the food bag on the boat, what I would give to have one of them. I was starving! The CNP and bananas weren’t keeping me from feeling hungry. I needed some proper solid food. I then got the call from my crew to stop swimming forward, at the entrance on Plymouth Sound about 500m from the Breakwater lighthouse, as two foreign naval ships were coming into the Sound for crew transfers. I knew too well what was going to happen and how long it was going to take as I saw the crew transfer boat and had witnessed them doing this sort of thing on a number of occasion when training in the past. Right I thought to myself, now’s a time to have some of those sausage rolls, that’s if the crew haven’t eaten them…they have a track record for eating my food!

My crew instructed me to keep swimming around the boat and maybe even to do some backstroke; it seemed like forever that I was swimming around circles. I was starting to get cold, the ships were in no rush to leave, but my spirits were lifted when a boat came past and all the people onboard where clapping and cheering for me.

We finally got the green light to enter the Sound; my crew were shouting at me to start swimming towards Plymouth. I was on the final leg home. I had swum across the Sound several times, but never when the tide is full ebb, the delay didn’t help. I counted off the navigational buoys and landmarks as I slowly made progress past them, I could now see where I was going to land to finish the swim. The sun had come out, which helped me warm up a bit. Plymouth from the sea on a lovely day is very picturesque.

Just one last shipping lane to cross and I would be at the finish. I was excited, but my excitement was quickly extinguished. I had to stop swimming forward again!!! There was another warship leaving the Naval Base; I took a peek around the bow of my support boat and could see the tugs manoeuvering HMS Albion through the shipping lanes. So close yet so far! At least the sun was out now so it wasn’t too bad and I took the opportunity to grab another sausage roll. Again I carried on swimming around in circles, waiting for my instructions to swim towards the shore.

Next thing, everyone was shouting and cheering at me to start swimming to the shore; this was it – I was about to swim into shore, climb out of the water and make swimming history as the first person in the 21st century to successfully complete the Eddystone swim.

Climbing out of the water and up steps, raising my hands in the air, was emotional and overwhelming, I had done it. To be greeted my so many friends, family and a TV crew was unbelievable. I was overjoyed. The icing on the cake was being congratulated by Sharon Miller (Price) who was the last person to swim the Eddystone back in 1987.“ 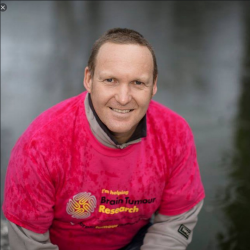 Neil Brinkworth
Neil Brinkworth is an open water swimmer who lives in Plymouth in the UK. In 2019, he swam the English Channel and raised over £10,000 for two charities, Brain Tumour Research and St Lukes Hospice Plymouth. He recently completed the 22.9 kilometer Eddystone Lighthouse Swim in 11 hours, 1 minute and 58 seconds.