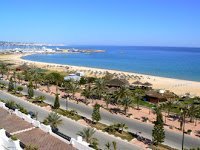 TUNISIA. Day by day, kilometer by kilometer, Nejib Belhedi is swimming 1,400K along the coastline of Tunisia. One of this week’s legs on his stage swim is along Yasmine Hammamet Beach. Known as Tunisia’s Saint Tropez, Hammamet is one of the country’s prime holiday destination.

A number of escort boats and spectators along the beach are expected to cheer on a man who has inspired his fellow citizens and others in the Middle East who wish to carry on his message of peace.

Other swimmers have committed to continue his swim along the coastlines of neighboring countries after Nejib has accomplished his 1400K stage swim along his entire native country.