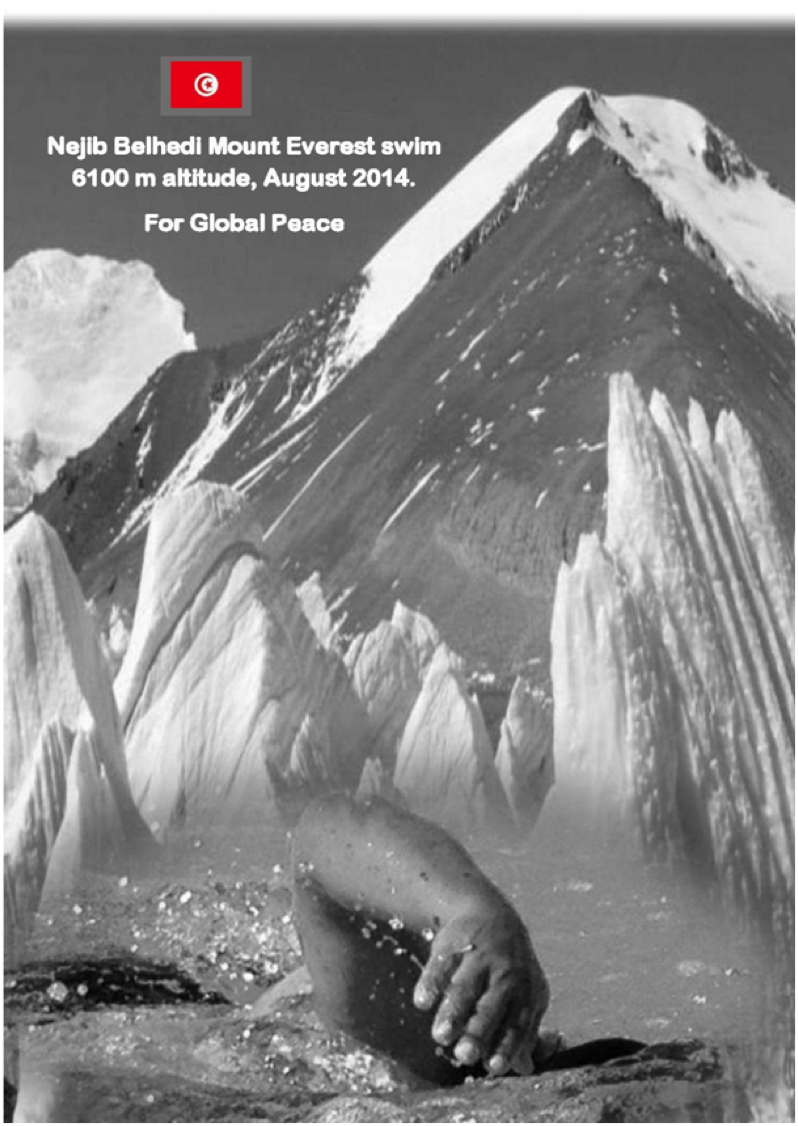 62-year-old Nejib Belhedi is preparing for a 1 km open water swim up in Mount Everest at 6,000 meters at altitude.

Walking up Mount Everest is hard enough; Belhedi is going to swim up there.

How is he planning on accomplishing this 1 km swim? By training at sea level.

“I conceived a new concept 061-6K,” explains the former Lt. Colonel in the Tunisian Army. “I will test it in Tunisia and I will prove its efficiency later during my Mount Everest swim. It’s a new theory of training at zero altitude to overcome the effects of high altitude during my swim up in Mount Everest at 6000 meters above sea level.”

He is confident 061-6K will work. “It will be a world vanguard of a training concept for high altitude exercise for open water swimming as well as for other athletic fields if I may able to overcome the challenges of my Mount Everest swim.”

In his meticulous way, Belhedi laid out his 061-6K plan:

I. Concepts of Acclimatization for High Altitude:

The originality of 061-6K gives the opportunity to conduct efficient training at sea level (zero altitude). “I would do it at 6000 meters or more. I consider this new concept as a revolution in high altitude training and it could replace the current concept of acclimatization.”

Belhedi explains how he will achieve this by educational respiratory. “Firstly, Extreme Educational Respiratory Training is a technique used in order to educate new swimmers to conditions in the water. We know about breathing for new swimmers as well as improving the aerobic power for competitive swimmers, but an appropriate training concept does not exist in the open water swimming world to resolve the limiting factors for swimmers in particular and athletes in general who are preparing to achieve high altitude objectives. I will prove it. This technique is in somes basic swimming books. By combining swimming information with some research done on high-altitude effects, I saw the light. This method of training is used extensively by swimmers It has the same convergence of effects as someone who is exposed to high altitude. What is this common extreme effects? It’s the well-known symptom – an acute headache – and a more grave condition: brain / respiratory odema.”

Belhedi is training in the Kef region, north of Tunisia. But he is training her not for high altitude, but for practicing his new concept in the big lake dams of Tunisia – the Oued Mallegue Dam – until he reaches the 061-6K level. He will be covered by Al Watanya TV 1 and will explain on Tunisian television about his Mount Everest Swim that will also give birth to this new concept of high altitude.

Belhedi explains, “I will not use the common concept to spend 21 days as my acclimatization period. I will jump in the tarn without acclimatization. I will spend only 12 days to go from Beijing to Lhassa and then from Lhassa to D12 in order to swim in the Mount Everest tarn at 6000 meters. So, at D12, I will undergo his final 061-6K test.

The scientists will examine me to see if how this new concept of utilizing aerobic energy with a very low consumption of oxygen and higher metabolic optimization. Aerobic , anerobic lactic and analactic, hypoxia could be melted relatively and thinly by Extreme Educational Breathing training to achieve my Mount Everest swim at this highest altitude.”

Belhedi needs to get used to swimming long distances with an extreme shortage of oxygen. “I will push my metabolism to support the effort of endurance for more strokes and will adapt my metabolism to support well the headache of extreme shortage of oxygen; the same symptoms that I will be vulnerable at the high altitude of 6000m.”

His training stage rules of the new concept 061-6K includes to proceed progressively during in a minimum of 3 months before attempting the Mount Everest Swim. “In the first stage of training, I will take one stroke and one breathe (inspiration). This is predominantly developing the capacity to do long, continuous aerobic work of 50- 60 strokes per minute. In the second stage, I will take 2 strokes per one breath in order to develop a daily, significant long distance continuous work. This will continue until I am in the sixth stage and am to be able to swim easily taking 6 strokes for every one breathing, covering a distance of 6 km.”

Belhedi has calculated an indication of readiness to swim at 6,000m altitude from sea-level training. “I have to reach 061-6K at 0 meters altitude before I will attempt the 1 km Mount Everest swim at 6000m altitude. I have to be able to swim 6 strokes without breathing and with only one breath as a repetitive macrocycle during the entire 6 km.”

The redundancy factors are ensured in this inter-operablity in accordance with the orientation that training has to be harder than the final objective on Mount Everest. Since I have to swim 1 km up on Mount Everest, I will train in Extreme Educational Respiratory or 061-6K or 6 km. Since I will have to face swimming with 5°/0 oxygen up on Mount Everest which only has 1/4 of 23°/0 of oxygen compared with sea level, I will be able to manage the limited oxygen volume of V/6 during his Extreme Educational Respiratory Training at zero altitude.” 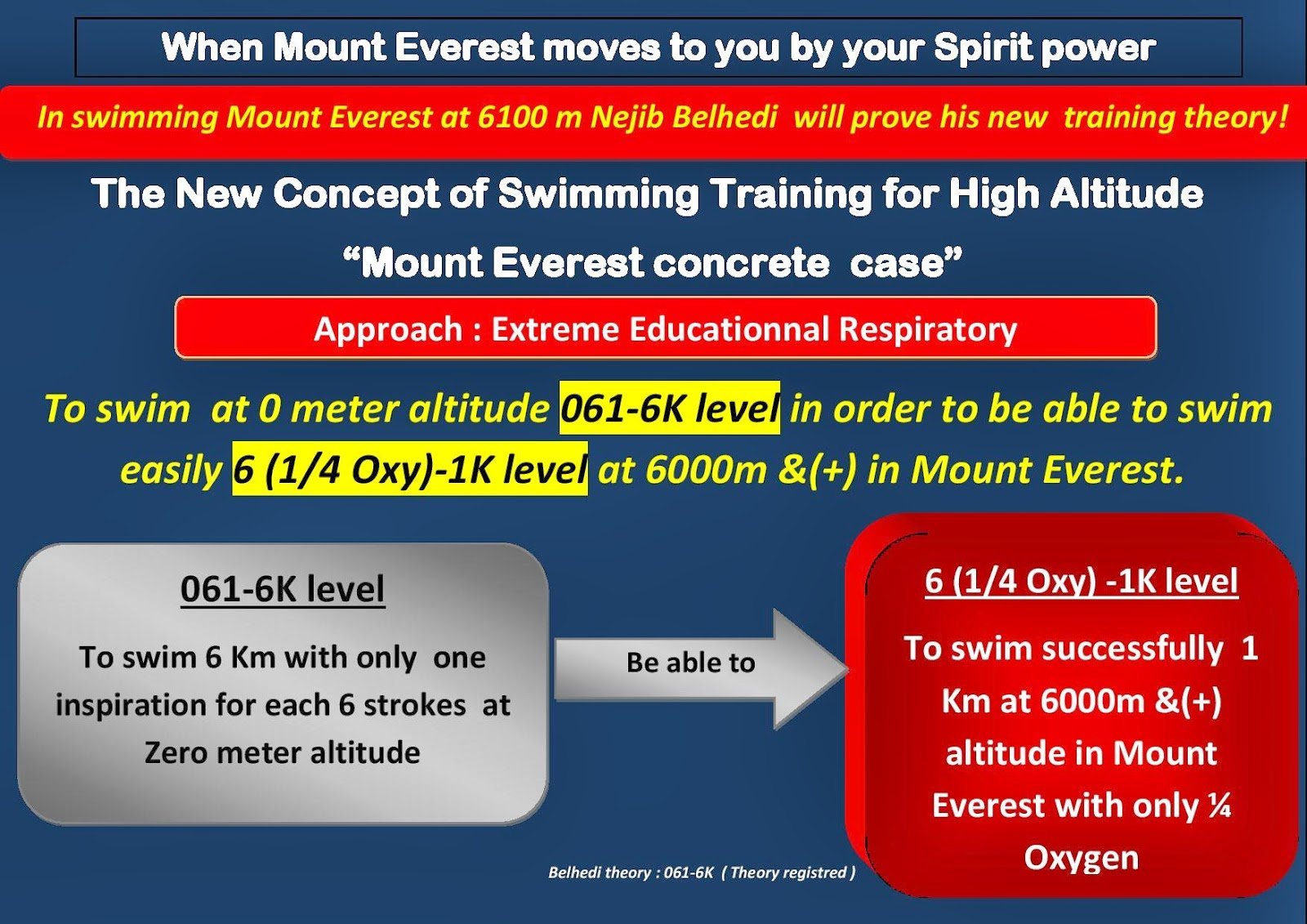 Additional information about his swim is here.