Nejib Belhedi continues to capture the hearts and minds of his fellow citizens and media of Tunisia with his unique and unprecedented Iron Swims where he pulls increasingly larger and larger boats filled with sand bags, children, camel, and dozens of adults.

His latest 500-meter Iron Swim was completed on March 26 in Tabarka.

Belhedi explained, “Just before my swim, the wind wasn’t so strong, about Force 2-3. But I was concerned because the ship was so big and the direction of wind could push it against from my course.

But before I started, the wind changed its direction. It became my ally. Ibrahim, my brave pilot on a Zodiac, was very happy. He was the first to feel and to discover this change of the direction of wind. He cried out, ‘The wind is changed; the wind is with you now.’
“

Belhedi had changed his strategy as he stood on the dock before he jumped in water. “I opted for the Hasty Attack mode to move the Titan ship from its grotto. In the first second of the race, I was like a boxer who gives a decisive knockout during the first second of the first round to his adversary. Speed. I said to myself, ‘Do it; just move it; it will be your follower. Keep Titan always in motion. I hit very hard the dock of the port on arrival as a true swimmer slaps dams.”

The 23-ton Albatros ship with 30 passengers on board was a significant step-up in the Iron Swim evolution. Belhedi explained how he accomplished his goal. “For the first time, during my departure, I rotated the ship 180° in order to make headway on the way of my circuit. Normally, the ship is berthed at the bank of my departure with its front head oriented toward the direction of the circuit. It’s very good to do this for a remarkable departure, but this time, it was greatly appreciated by the public as a show of force and domination in looking at the ship as I rotated it.

I have to prove that it’s not a coincidence that I accomplished my Iron Swim again and I’m able to reproduce it over again and again with more talents and performances.

I started with a good wind for the first part of my swim. My course coincided perfectly with the direction of northeast Force 2 wind with an occasional Force 3 gust. But, just when I completed the turn on the second part of my circuit as I turned east as the infrastructure of the port requires, my mission became harder. Indeed, the wind and gust laterally pushed the Albatross that I was pulling. This pushed me towards the southern concrete bank of the port.

I have had to deal with many heavy pressures several times especially in synchrony with the rhythm of wind and its gusts. It was a strong sensation as something invincible that attempts to defy you despite your determination and power.

I thought at this moment of the Iron Swim was the ultimate: to be or not to be. I pass or I don’t pass.

During my fight, my arms became so near to stick under the water surface, but my arm recovery became so low over the water. This was the difference. Resist and to be able to continue to move powerfully under such major limitation. It means that my waist had to be an iron support board. This is the prestige of the Iron Swim, the throne of sufferance and resurrection. That’s what I did perfectly.”

Belhedi’s long-term goal is to pull a 100 ton ship for 1 nautical mile. To date, his Iron Swim record is pulling a 70 ton ship 350 meters.

“To reach this goal, I planned that in the beginning of this year, a 20–30 ton ship is the first initial objective. I opted to progress inspired by the method called the Parrot. Before I place any foot ahead, I have to ensure my support foot. So, I’m moving from plate to plate which are done almost already during 2015, but in increasing the respective distances performed for every plate.”

When Belhedi started his latest Iron Swim, you could sense and feel the spectators collectively holding their breaths. “You could hear the strong beats of their hearts. All these phenomenon happened in total silence; dominating the ambiance of the port. Their blue silence was melted by the fresh sea glow and the odor of the boats torn up sometimes by the cries of seagulls.

When I began to move my arms, the first meters of the swim looked like a very long route, especially with the ship berthed at quay. Maybe it will move, maybe it will not. All were waiting for a miracle will happen. All spectators were looking forward to see if the ship will produce the waves of hope. All the eyes were pointed curiously at the rope that attached to my waist.

Suddenly, the ship began to moves. Slowly, slowly at first. All in harmony and unison; all together were elated and overjoyed. The port vibrated with joy and an energy-soaked atmosphere. I was moving with the ship as a perfect duo.

The audience reacted The passengers on the ship felt like they were on a magic tour aboard a flying carpet across the sky. There are who preferred to follow this dynamic show by walking along the bank to live the moment meter by meter. The duo became a trilogy: the swimmer, the ship and the public – all in synergy. 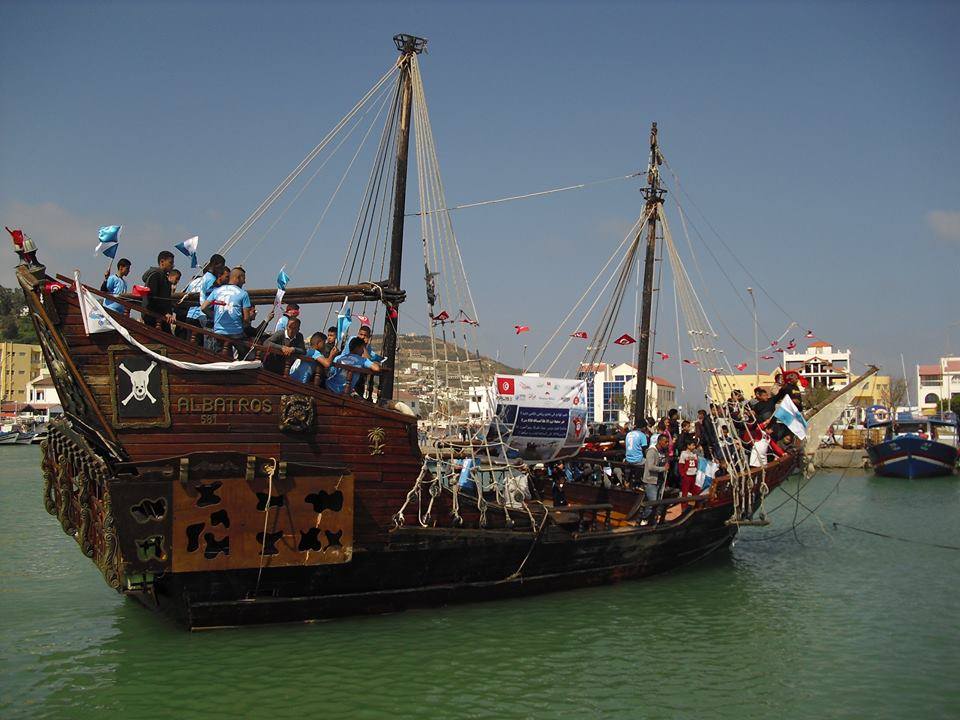