Neoprene and wetsuits are de rigueur for triathletes and surfers.

But buoyant, protective wetsuits have never been a part of competitive open water competitions…until this year.

With the water temperature currently at 64°F, a shade below 18°C, in Castaic Lake, the site of the USA Swimming Open Water National Championships between May 19th-21st, athletes are testing out and selecting wetsuits that are between 3 mm and 5 mm in thickness.

“We assume that FINA adopted this new rule for safety purposes,” commented Steven Munatones. “Whatever FINA’s reasoning, the adoption of wetsuits dramatically changes the landscape for elite swimmers. 3-5 mm wetsuits can dramatically change the body position of swimmers in the water, especially in salt water, and can provide different benefits for different swimmers. It will be interesting to see how the degree of buoyancy will change over time due to the different types of materials used in the wetsuits. The coaches and swimmers have time to study and test the different properties – from buoyancy to flexibility – of the different kinds of wetsuits that are currently out there and will be developed by the 2020 Tokyo Olympics.

The addition of 3-5 mm of fabric around the shoulders will change the swimming stroke for some swimmers, especially after swimming 8, 9, 10 kilometers. Additionally, what will or should do swimmers wear under their wetsuits? Nothing, a bikini, a regular swimsuit or a tech suit? Also, for places like Southern California or Florida where there are many triathletes and surfers, the local shops have plenty of different styles and types of wetsuits. Swimmers can try on these suits in practice to figure out the best wetsuit for them.

But what about swimmers who do live or train in parts of the country where wetsuits are readily available? Of course, they can purchase online, but they cannot try on in a virtual store, especially how a wetsuit feels after 1 or 2 hours of racing.

Even most triathlon wetsuits are meant for 1.2 miles or at most 2.4 miles of racing…not 6.2 miles of competitive open water racing. These are just some of the issues facing coaches, parents and swimmers with this new wetsuit rule.

So not only do swimmers have to train and taper for their competitions, but they also now have to consider the type, composition, compression panels, thickness of the wetsuit and its comfort and range of motion – and how the neoprene wear can ultimately enhance their speed and stamina.

It adds a whole range of different elements to consider and prepare for at sport’s highest level. If tech suits once changed the landscape in the pool, wetsuits up to 5 mm will certainly do the same in the open water

USA Swimming sent the following information to the participants on May 9th:

Wetsuits must be between 3mm and 5mm thickness. They need to completely cover the torso, back, shoulders, and knees and shall not extend beyond the neck, wrists, or ankles. The FINA Requirements for Swimwear Approval prohibit the variation/modification or customization of the suit. 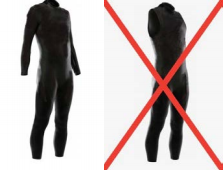 If you are interested in purchasing a wetsuit you may visit your local triathlon shop or purchase through one of USA Swimming’s suit partners. Arena, Speedo and TYR have generously offered a discount to the competitors of the 2017 Open Water Nationals and Open Water Junior Nationals.


Adoption of wetsuits means that race numbers are no longer marked on the athletes’ upper arms and their upper backs. With neoprene required to entirely cover the athletes’ torso, back, shoulders and knees, swimmers are marked with their race numbers on both hands and/or their swim caps.