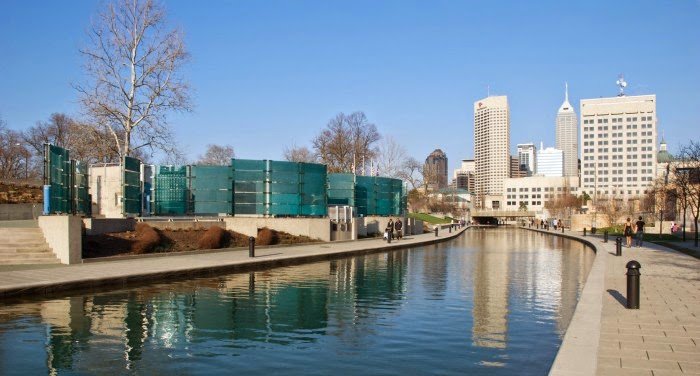 The Sharkfest Swims adds to its series:

While the Mystic Harbor race will be held in Stonington, Connecticut in the Atlantic Ocean, the Indianapolis Sharkfest Swim will take place in the Indy Canal in downtown Indianapolis [shown above].

The downtown swim through the center of Indianapolis will offer a 1500m swim that will start at Ohio Street Basin behind Fire Station #13 and the Indy501 (501 meters) will start at the Walnut St. Basin in front of the USS Indianapolis Memorial. Both distances will finish at the Admiral Spruance Basin. This spectacular swim is like swimming a mile in a long metropolitan-center pool where sharks are unlikely to be, surrounded by sidewalks where spectators can cheer on along the entire course.

The Mystic Sharkfest will be a 1500m swim from Middle Wharf at Mystic Seaport, down the Mystic River and under the famous Bascule drawbridge to finish at Dock D at Seaport Marine next to Red 36 Restaurant. This swim will give you the perfect excuse to visit a classic New England seaport on Long Island Sound.