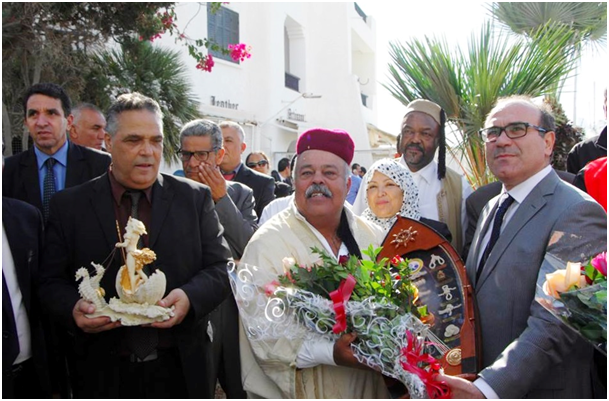 He also received a very cool Iron Swim trophy to commemorate his unprecedented swim that was presented to him by Fethi Bdira, the Governor of Sousse [shown on left], and Habib Ammar, the President Directeur General of La Société d’Etude et de Développement Sousse – Nord [shown on right].

Governor Bdira and President Directeur Ammar have promised their support to allow Belhedi to create an even more extravagant Iron Swim on New Year’s night. Belhedi plans to start swimming at the stroke of midnight in Port El Kantaoui with the bonfires blazing onshore as he attempts to pull a ship of 50 tons in the Port El Kanaoui Challenge. “My Iron Swim will be transmitted live as I face the challenge of pulling a 50-ton ship, wishing everyone a New Year of peace for all the world.”