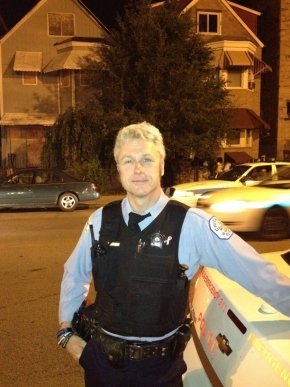 Nial Funchion faces assumed challenges and unexpected confrontations during his marathon swims as he runs up against cold water, currents, tides, wind-generated surface chop, marine life, and boat exhaust in the dynamic environment of channels and lakes. His swims are neither easy task to prepare for nor to accomplish.

But he keeps going. And he continues to achieve his goals along the way.

He completed the Catalina Channel to become the 72nd person to achieve the Triple Crown of Open Water Swimming. And he keeps going, helping out others in the sport with his own aims to complete the Oceans Seven.

But Funchion also faces significantly more challenges and confrontations in the course of his daily life in the station and in the streets as a police officer.

This is one chapter of his story along the way:

Daily News of Open Water Swimming: Is swimming a stress reliever for you?
Nial Funchion: Swimming gives me a clean slate every morning. It keeps the internal system rolling; it clears the tubes you can say. But way more importantly, above all else, it fills up my gas tank.

This has been the routine for the past 22 years at UIC, 20 years of it being on the Police Department. The gas tank that’s gets depleted is my soul, my spirit. Chicago politics, bureaucracy, injustice, prejudice, hypocrisy, mistrust, etc., executes the soul over time and you are left with nothing but an empty shell if you are not careful. This is cold hard COMBAT, a salvaging effort that works due to the people and that you earn your accolades, your SPOT through discipline and effort. It is your opportunity to expose your true self, your core, your guts. I feel people need that. I do. It is the most functional environment, the best people, and filled with the opportunity to receive the most potent compliments but more importantly to GIVE those compliments. There is the practice. All this before 7:30 am
…

Daily News of Open Water Swimming: How many police officers swim as a form of recreation or fitness in your area?
Nial Funchion: I am the only one at UIC that I know of. It is a white rhino group, rare.

Daily News of Open Water Swimming: What benefits does swimming provide you that translates to direct benefits for your job and health?
Nial Funchion: Mental health, in my opinion, is the biggest benefit. Maintaining a Champions Attitude. 20 years ago when I took this job I had one goal: to be able to recognize myself at the end. Being around people that do other things, functional, putting in an incredible effort every morning is just something I need to be around. It is the fish bowl that I want to live in. Physically, the benefits are starting to surface. I’m at the tail end of a career, been through the ringer, and I’m just warming up. I’m looking forward, seeking opportunities to tell some stories, write (learn how to spell), and make connections to people’s lives.

Daily News of Open Water Swimming: How much money do you want to raise on your charity swims?
Nial Funchion: As long as I have www.beyondbreakwalls.org, I will give through that avenue. There is swimming involved and a financial element to it, but that is simply an avenue. I want to reach the soul, the spirit, of people especially patrolmen. Throughout the site, the words ‘it has nothing to do with swimming’ – swimming just gets me in the ring ready for the fight, the salvaging effort. If I was to put a dollar sign on it I would like to make a dent with $50,000 over the next 3 years through www.beyondbreakwalls.org.

Daily News of Open Water Swimming: Why do you feel the need to give back?
Nial Funchion: Because I’m fortunate, I got lucky. Not everyone survives. They may make it to the end, but at a cost. The sacrifice is to great sometimes and it doesn’t need to be that way. The soul gets widdled away and all to often you end up simply existing, a shell (like the locust bug) of what you once were. The potential given at birth as a human being gets kicked to the curb all to often and then it’s just a matter of time. Waiting. I went the opposite direction. I still dream, I still have hope in my heart. This is what I give back. Hope and dreams are exemplified through swimming to other shores, it is the example of hope and dreams, no hypocrisy involved. I’m setting a trap to snare some souls, its priceless.

Daily News of Open Water Swimming: Did you personally know any officers who were among The Fallen?
Nial Funchion: Absolutely. I remember being on a detail as the Tail 2 car for funeral processions and Presidential details which if it ‘hit the fan’ the procession would continue forward and the Tail 2 car would stay behind to render medical assistance/aid to whomever. This has the potential for disaster, but it was an honor to be in that position especially for the President. But I remember being worn out from all the funerals and it started to get under my skin, the faces started to become familiar. I became depleted after a while and couldn’t ‘fill my tank’ anymore, so I knew I had to back off for a while for a breather.

Daily News of Open Water Swimming: Do you think of these individuals while you are swimming?
Nial Funchion: They are my carrots. I can see their faces sometimes and remember some of the experiences. I think of the sacrifice, their families sacrifice, and then when it gets rough in a swim, or my life, I cant justify giving in to any internal excuses.

Daily News of Open Water Swimming: If you could say something to these individuals, what would it be?
Nial Funchion:Thank you.

Daily News of Open Water Swimming: Why swim as opposed to doing a marathon run or climb up a mountain?
Nial Funchion: Because it has the components of risk, low odds of success, journey, mystery, but it exposes the intangibles of being a human being. You get in at one country and say you will make it to the other. Man that takes ***** guts. Living your live sometimes will take the same guts, same nerve, same strength. It will take stone cold dreaming and hope and its up to you under your own power, your own will, ‘It has nothing to do with swimming’ to make it to that other shore. You will live and become the example to those connections into people’s lives…never existing but living deep.

Daily News of Open Water Swimming: As a general rule, do “bad guys” swim?
Nial Funchion: I never was concerned about bad guys in the early hours at the pool or at the beach. I have a personal theory that the discipline it takes to get up at those hours will separate many of those individuals from the mix.

Daily News of Open Water Swimming: If you were chasing a bad guy and he dove into a lake to escape, how long would it take for you to capture him?
Nial Funchion: That would be an easy one…