Nicolas Knap Returns To Form In The Open Water

Nicolas Knap Returns To Form In The Open Water

Courtesy of Asociación Cruce a Nado del Estrecho de Gibraltar, and Ben Walsh, Spain – Morocco. After a 14-year absence from the swimming scene, Nicolas Knap has returned to the open water. The swimmer from Québec City was a member of the French national open water swimming team from 1996 to 2002 who finished 2nd overall in the FINA World Cup marathon swimming circuit in 1997 and 5th overall on the 1998 circuit. He began getting back into the sport at 2016 Morocco Sahara Edition, a 6-day, 4-stage swim of 6.5 km, 8.5 km, 10 km and 5 km in the Sahara Desert. But the 45-year-old finally returned to form with a record-setting 14.4 km crossing of the Strait of Gibraltar from Spain to Morocco on June 15th in the 17.5°C water as ratified by the Asociación Cruce a Nado del Estrecho de Gibraltar. He set both the French and Canadian record in 3 hours 17 minutes 19 seconds, breaking the old record of 3 hours 17 minutes 49 seconds. He answered questions about his comeback: Q1. Are you both Canadian and French?  Nicolas Knap: I was born in Cote d’ivoire in Africa in 1973. I moved with my parents at 7-8 years old to France. My parents are french and I am French first.  I moved to Canada after my marathon open water career in 2005. My last professional race with the International Marathon Swimming Association was la Traversée internationale du Lac Memphrémagog where I finished second and did the fourth fastest time ever in 8 hours 16 minutes 48 seconds. I have Canadian citizenship and have lived in Canada in Quebec City since 2015. Q2. Whose record did you break in the Strait of Gibraltar?  Nicolas Knap: I swam 3 hours 17 minutes 19 seconds on June 15th at the age of 45 (born July 28th 1973).  On May 31st 2018, Muna Al Sharari of Canada set the Canadian record in 3 hours 17 minutes 49 seconds at the age of 22 (she was born on June 10th 1995).  The male Canadian record was held by Shane Richard Collins in 4 hours 37 minutes, set on August 2nd 2007 as a 57-year-old (born June 9th 1950).  Deborah Lynn Collins swam with Shane in a tandem swim; she also finished in 4 hours 37 minutes as a 47-year-old, born October 4th 1959. The previous French records were held by Nicolas Frederic Patric Tiffou in 3 hours 33 minutes set on September 8th 2016 as a 49-year-old (born April 26th 1967), by Samy M’Zari in 3 hours 53 minutes set on May 15th 2012 as a 23-year-old (born November 10th 1988), and by Catherine Marco in 3 hours 58 minutes set on July 17th 2004 as a 41-year-old (born November 20th 1962). Q3. Can you describe your crossing?

Nicolas Knap: I was ready to swim on June 7th. My window was June 7th – 16th. The weather conditions were not really good.  On June 9th, the ACNEG organizing committee asked me if I could give my spot to André Wiersig because it was his last day there. [He was en route to completing the Oceans Seven]. I accepted this request with pleasure. It was important to me. Over the next few days, the weather conditions were bad with a lot of wind. Every day, I watched the forecast and wind and water conditions.  I waited in those conditions to change for 8 days and was wondering if I would be able to swim.  But the ACNEG called me to swim on June 15th and to be ready at the dock at 8:15 am.  At around 8:39, I started to swim. I swam fast for the first part of the race as fast as possible to overcome the strong currents, waves and cold. First part, I swam 3-4 km and saw jellyfish in a stressful situation. 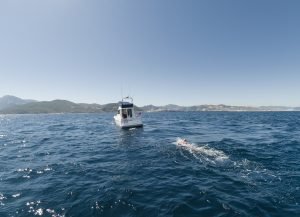 I arrived in zone 2 (+/- 7-8 km) where it was warmer.  There was blue water, fewer waves with the current running from the west, and waves from west. I passed a big ship. My escort boat and the yacht saw dolphins, sperm whales and perhaps orcas. I was concentrating in order to maintain my speed. I did not see any of this marine life. As I swam closer to Morocco, I saw its mountain and rocks. I tried to increased my speed, but it was tough. The sea was angry and I was tired because my feeding was irregular.  I never received information about my speed, distance, or time while I was swimming.  I swam alone without any information and a minimum of feeding during the entire crossing.  I was tired because my energy decrease a lot. I fed myself every 15 to 20 minutes. Then the feeding breaks increased to every 30 minutes and then every 45 minutes. I had no clue what the time or distance were. At around 1,5 km from the rocks of Punta Cires, my escort boat told me to swim faster. I did my best, but I found myself in a washing machine with strong currents, cold water, and a lot of waves around me.  The closer I got to the coast, the more I felt like I was going backwards. It was endless. I finished by touching the rock of Punta Cires. I climbed has an explorer and I waited a few minutes to breathe and appreciate the moment. I told myself that it was incredible to be able to cross the ocean. It was my first solo swim. I was anxious and it was a dream to finally be able to accomplish a channel crossing one day since I have done 93 open water races including 36 marathon swimming races over 25 km in distance.  So I have race 1700 km in competition including 55 podium finishes over the course of my career. I stopped swimming for 14 years. But then I restarted 3 years ago when I was only able to swim 200 meters.  Now, I am able to swim across the Strait of Gibraltar.  For me it is one step. Copyright © 2008-2019 by World Open Water Swimming Association