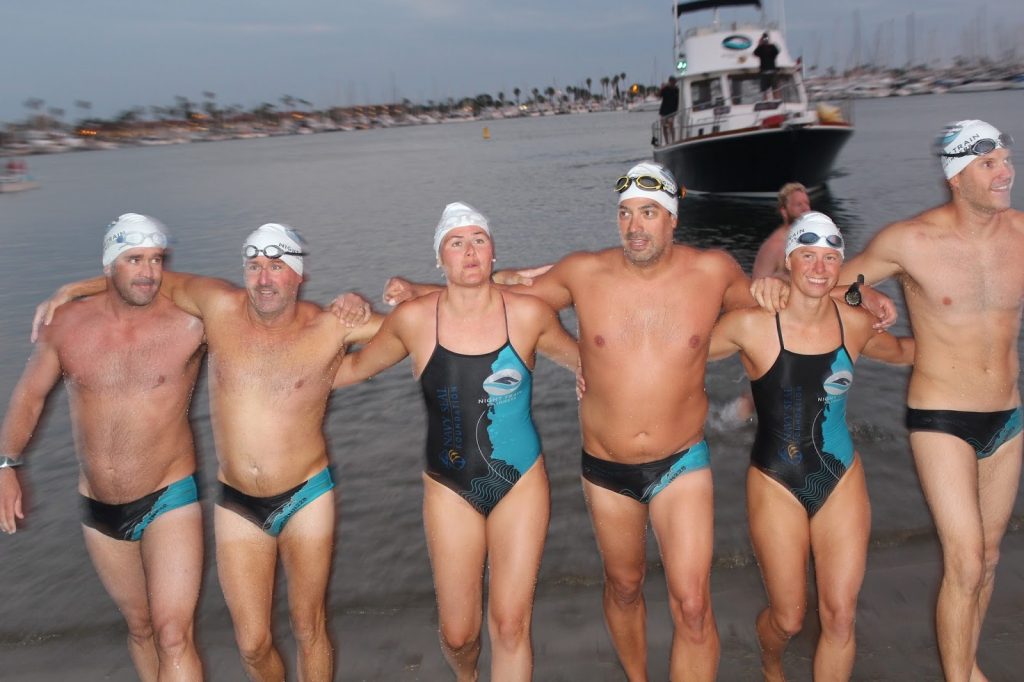 Vito Bialla and the Night Train Swimmers hosted a night of gratitude to the donors and supporters of their world record relay of 228 miles at the San Diego Yacht Club tonight.

On a summer night much more calm than the conditions that they faced over their charity swim for the Navy SEAL Foundation, each swimmer told of their relay along the California coast.

It was an evening with big thoughts and definitions of courage and sacrifice.

Grace van der Byl was described by Bialla as their toughest swimmer. “Each hour that I was in the water (on 17 different legs of 1-hour each), I told myself that it is the only hour that I was going to have to do. That was my mindset. So I thought that I was just giving up 17 hours of my life, but the members of the Navy SEALs give up their entire lives for us.”

Zach Jirkovsky who was described as Cool Hand Luck was succinct in a soft-spoken statement, “Something just pushes me in the water and I go. But I won’t lie to you, it was tough out there. I am not religious person but I prayed. But here I am alive, so it is good.”

Bialla also introduced Walter Scott who was the alternate swimmer for the Nighttrain228. “Walter had the toughest job on the team. He never knew if he had to swim, he was always on standby just in case someone got injured.” Scott responded, “Well, it was actually the easiest job because no one in this Night Train group was not going to do it. No one was about to pull out. The Navy SEAL Foundation is near and dear to my heart. But six people completed this swim and being backup was an important role. All donations are greatly appreciated.”

Blair Cannon tells of training with Scott in the La Jolla Cove prior to the relay. “Walter trains all by himself at the La Jolla Cove at 5 am every morning. So I decided to swim with Walter as part of my training. When we went out for the first time, he tells me, ‘Don’t swim so close to me. But I had to get used to that feeling of swimming in the ocean in the dark. I remember during the relay when I was swimming about 20 miles offshore and fatigue was starting to set in. It was dark and I couldn’t see anything. But something good size hits me in the legs. It keeps on bumping into me. Then something else starts nibbling on my toes. I think that was a large school of fish that was nibbling on me. I do not want anything touching me out there. So I yell a few choice words to our pilot and he turns on the lights and stops the boat. Those are the two things that I precisely did not want him to do. I think we all knew the physical side of things, how it was going to be tough. But it was the mental side of things that we had to keep together. After I told everyone that something was bumping me in the night, they said, ‘Yeah, something was bumping into me too.’ Suddenly, we all had secrets that we told each other. But you keep on going. It was all business out there.”

It was clear that the night and celebration was an apropos melding of the Navy SEAL psychology and the mindset of the six rough water swimmers who faced 4 long days and night in the cold Pacific Ocean. The mutual respect was obvious as they enjoyed a beautiful evening overlooking the Pacific Ocean.

It was ultra-marathon runner Mike Trevino who summed up the evening and the similarities between the SEALs and the marathon swimmers. “Think big. There are only limitation that you place on yourself. Think big.”

Bialla agreed, “Yes, we got [more] swims in the planning stages.”