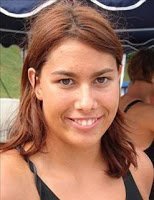 Nika Kozamernik from Slovenia is a world-class open water swimmer who competes on the FINA professional marathon swimming circuit and was third overall in the 2009 European Open Water Swimming Cup.

Nika’s primary focus in 2010 will be the World Open Water Swimming Championships in Roberval, Canada. “My goal is to finish in top 16 (like semi-finals in pool swimming). After that, I will also swim at the European Championships in Budapest in August with the same goal.”

At the 2009 World Swimming Championships, Nika almost reached her goal, placing 17th in the 10K race. But the level of competition is something fierce. Despite placing 17th, she was only 27 seconds behind Keri-Anne Payne, the gold medalist from Great Britain, after two hours of hard racing off the coast of Italy:

In addition, Nika is going to swim as many races as possible on the FINA 10KM Marathon Swimming World Cup with the goal of finishing in the top 6. “I will also do the first race of LEN European Open Water Swimming Cup in Israel in May.”

Like all the other marathon swimmers, her decisions on where and when she can race is a matter of finances. “I would love to swim all the LEN Cup races and try to defend my third place overall from last season. But, the 2010 season will be quite busy because I am also finishing my studies at the University of Ljubljana (the first and the largest university in Slovenia) and will have to decide where to continue my education while I combine it with swimming.”

Like all world-class swimmer, Nika’s long-term goal is qualifying for the Olympic 10K Marathon Swim at the 2012 London Games and doing well in the 2011 Shanghai World Swimming Championships.

A hard-working young lady and world-class marathon swimmer. May she reach her goals in Canada, Shanghai, London and everywhere between.