No Excuses In The Open Water

Drew Hunthausen is a blind, hearing-impaired triathlete who will attempt his longest swim at the 3-mile Naples Island Swim in Long Beach, California on August 12th.

Hunthausen, known as The No Excuses Blind Guy is also a motivational speaker and author of The Five Keys To Living A No Excuses Life Filled With Joy, Peace, and Prosperity! [see here and here].

Blind swimmers like Hunthausen can be helped by coaches and swimmers like Brian Suddeth of Maryland. Suddeth uses an open water swimming tether with his athletes that was developed by Deborah Conley. 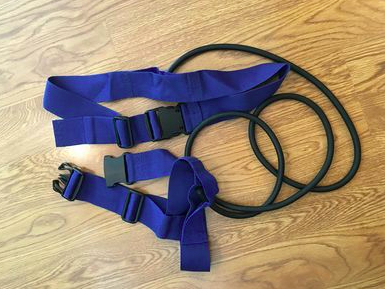 Conley advices, “Swimmers find this tether very useful in open water, both for blind and sighted athletes who have little or no experience in open water swims. It can be a confidence builder tool to be tethered an experienced open water swimmer. Moving from pool to open water can give a newbie some anxiety for younger teens and adults. The tether can reduce anxiety.”

“Mark is very pleased with the tether.

We found the best position for us is to have the tether tubing in the middle of our backs to limit any touching to legs or hands. The tube does naturally vibrate slightly in the water at our pace, but it is ignorable. The tether is a huge confidence builder for Mark and for me in several ways.

1. He can be escorted by swimmers who may not be much faster than he is without the guide worrying that Mark might outswim them. This opens many more options for him in guide availability. It is also useful for events that require the guide to be the same at all stages, as many triathletes see the swim as their most challenging stage.

2. He has more confidence when I escort him as he always knows that I’m close and can self-correct his course when he either taps me or feels the tension on the tubing. When doing untethered swims, he has to trust me more to be significantly faster than he is so I can swim beside him on either side and help him correct no matter which way his strokes pull him.

3. At times in our swims, Mark has had difficulty hearing verbal commands for “Right, Left, Stop” which we have been using. The tether eliminates the need for those.

4. Both of us are in our 50’s, and we have to face the truth that medical issues can occur anywhere at anytime. If they do, both of us know we can find the other in the water quickly and provide aid to the other while signaling for assistance.

5. Mark and I are setting goals to do more unprecedented swims in open water events: his by being the first blind swimmer to complete an open water swim event and mine to be the first to butterfly them. For the first time, I can feel confident that I can do butterfly and still escort Mark with confidence. The Lending Sight Swimmer allows me unrestricted freestyle and butterfly strokes and Mark can’t get away so I don’t have to keep him in my sight as constantly.

In our past untethered swim events, I had to focus 100% on keeping close to him to maintain his course. Now, maybe we can both set a record in the same event. We want to earn our nickname of “The Odd Couple” since it has shocked people watching us to see a blind swimmer being escorted by an open water butterflyer

Their plan to combine the use of the Lending Sight Swimmer tether system and the Safer Swimmer Float for visibility in the open water. Suddeth explains, “This tool gives an additional layer of confidence for any open water swimmer who needs the safety of being easily visible to lifeguards, boaters and others along the shore, as well has having the option to take a break in a long swim if needed, or use the dry bag capability to carry water or other essentials.

Neither of these provides any edge in speed or flotation when swimming, but both provide safety. These excellent safety devices can give a heightened level of safety confidence to the organizers of open water events when used by both sighted and guided swimmers or when there is a mix of competence levels
.” 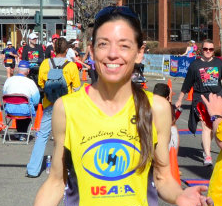 Conley founded Perceptual Positions to create awareness for Post-Traumatic Stress Disorder (PTSD) and allow those suffering with this disorder to connect with others, and discover an interpersonal environment of mutual support.

She has suffered from PTSD for years and enjoys assisting visually impaired and visually and hearing impaired athletes by acting as a guide in the active pursuits of running, biking, and swimming. Perceptual Positions sells assistive devices for visually impacted athletes including running and swimming tethers under the brand Lending Sight Tethers.

Conley described why she designed the tethers as is, “There is a quick release form belt on both, so either party can release. The belts have heavy duty rubber that stretches to double while remaining secure. This was to allow for strong current and waves in ocean.

I developed these tethers specifically for blind athletes. My mission is to make safe products that make it possible for affordability for most people.

The belt was originally designed to be used in a USA Triathlon championship race. The swim was in the Hudson River in New York. The tether has been used in many triathlon races; however, it was never be officially approved.I never personally been requested or required [to seek] for approved swim tethers.

The belts are adjustable for different waist sizes