No Ferries On The Return From Peaks to Portland 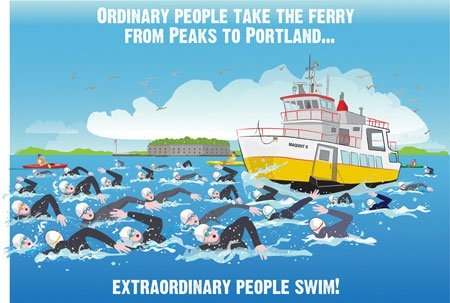 23 of the swimmers braved the water without wetsuits with most of the participants guided by an escort kayaker. In a nod to safety, the Cumberland County YMCA-organized event had race director Terry Swain as the designated last swimmer in the 65ºF (18ºC) Atlantic Ocean at the entrance of Casco Bay.

With the start at slack tide, the swimmers zipped around Fort Gorges before the incoming tide occurred later in the race.

Defending champion Michael Leake of Vermont won the naked (non-wetsuit) division in 59:09.5 while Carla Dropo of Massachusetts won the women’s division in 1:04:33. Scott Yeomans of Pennsylvania also defended his title by winning the neoprene-clad division in 48:30.1 with Kirsten Read of Maine winning the women’s side in 55:08.9. Miyuki Fujita of Japan, the only person to complete a three-way crossing of the Tsugaru Channel, received special recognition for traveling such a long distance to compete in Maine.