No Lanes No Lines No Limits In Lake Memphremagog 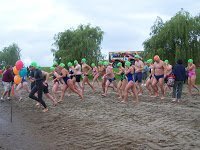 While no open water swim on Earth has the amount and value of prizes as the Flowers Sea Swim, the prizes that are awarded in open water swims around the world are getting more and more creative and valuable.

The Kingdom Swim on July 24th in Vermont’s Lake Memphremagog, with races ranging from 100 yards to 10 miles, offers an interesting slew of prizes.

Hand-carved commemorative walking sticks are award to the overall male and female winners of the 10-mile swim while the “Last One Back to the Barn” is awarded to the swimmer with extraordinary perseverance. As Phil White of the Northeast Kingdom Open Water Swimming Association explains, “You don’t have to be last to win this award, just a stubborn cuss.”

The George Hunihan, For the Love of the Swim is awarded to the swimmer who best exemplifies the spirit of IROC’s summer athletic events: Just for the Fun of It.