No Lanes, No Walls, No Borders In Search Of Memphré 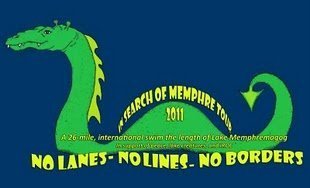 Intrepid swimmers will swim 26 miles across Lake Memphremagog that lies between the state of Vermont in the United States and the province of Québec, Canada in search of Memphré.

In Search of Memphré is a new international cross-border 26-mile marathon swimming event that harks back to the early days of the Traversée internationale du lac Memphrémagog.

The swimmers, their crews and the organizers are on a three-fold mission:

1. To promote a more open border with between American and Canadian neighbors even as they support efforts to deal with terrorist activities.

2. To raise funds to support the continuing operations of the Indoor Recreation Center Orleans County which provides critically needed health and wellness services for people at risk such as those suffering from diabetes, heart disease and cancer.

3. To search Memphré, the famed, albeit mythical, reptile-like creature of Lake Memphremagog (the American version of the Loch Ness Monster).