No One Has Ever Done It…Yet 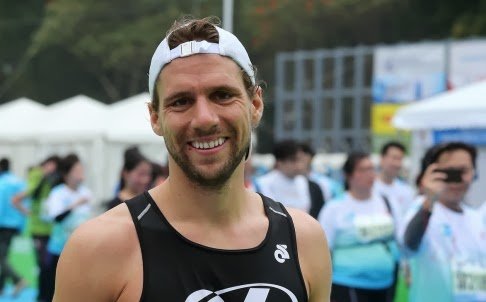 Alexandre Reinert gave it his best shot in trying to join the Sub 3 Squared Marathon Club during the Cold Standard in Hong Kong.

Five athletes did a 10 km marathon swim followed by the 42 km run, trying to do both under 3 hours.

Chris Molnar, Alexandre Reinert and Henry Wright from Hong Kong, together with Chad Bishop from Singapore and Tobias Frenz from Malaysia, made the attempt. Wright, a swim teacher, did a 2:57 for his swim, but just missed the standard with a 3:05 marathon run. Reinert, a trader, ran a 2:59:52 – only 7 seconds under the sub-3 mark on the marathon run, but was 20 minutes over in the swim although he swam with a wetsuit.

Wright was on target during the run until 25 kilometers, but then “my ankle just exploded. I was limping at the finish. It was tough, it’s like an endless highway – you keep thinking you’ll hit the [Western Harbour] Tunnel and be close to the finish, but you don’t.”

But the athletes know their first attempt was a tough challenge. “The marathon run was really hilly, particularly coming out of the [Western] tunnel.” They will have another attempt during the [warm-water] Clean Half during the summer. Wright says, “No one’s ever done it, so we’d be the first people to do it.”