No Walls, No Turns, No Worries For Haley Anderson 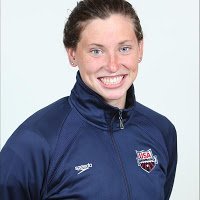 Haley Anderson is certainly peaking at the right time.

After turning in an 8:26 in the 800m freestyle without a full taper at the USA Olympic Swimming Trials last night in Omaha, Nebraska, she certainly is showing the world-class speed and stamina .

But the northern California native says, “I hate walls. I hate turns.” It is certainly an unusual statement from the reigning NCAA champion in the 500-yard freestyle, a gut-busting 4+ minute swim that requires 19 flip turns in, and the third-place finisher in the 800m freestyle at the Trials.

But the personable 20-year-old has good reason for her dislike of walls and turns. She has quickly turned into one of the world’s fastest open water swimmers.

After hovering in the top 5 among the American elite open water swimmers, she began hitting her stride in June’s FINA Olympic Marathon Swimming Qualifier. Her victory elevated her among the serious medal contenders in the Olympic marathon swim next month in London.

While Anderson’s past was dominated by racing up and down pools, her sights now clearly include the open water. Open water races, however, presents time – lots of time – to think and react which plays to her strengths. “During the open water, I have time to doubt myself with lots of negative thoughts. During the first 5K, I was thinking, ‘Oh my goodness, I need to work my way up the pack.’ But as I started to work my way up the pack, I get more and more positive. It is like a natural progression.”

Upwards and onwards. Her coaches know she is plenty of upside in the sport.

“Haley showed such composure at the Olympic Qualifier [in Setubal, Portugal]. She was tactical, patient, relaxed, and focused,” said her coach Catherine Vogt. “She showed speed when it was needed. I told her to stay in the front pack, take good feeds, and adjust if anything didn’t go according to plan.” And they both trusted on her closing speed on last lap.

She will draw upon that speed in London towards the end of the 2-hour marathon swim. “Haley has been preparing all year,” recalled Vogt. “Even with NCAA championships, she has continued to stay focused on her dream. One step at a time, preparing with cold water swims, good pool training and racing.”

Anderson possesses two characteristics that will prove valuable as she circles the Serpentine six times in the Olympic 10K: size and speed. Her lengthy frame and fast turnover will be assets she will call upon as she comes barreling down towards the finish, most probably with 5-8 other leading contenders. If pre-race predictions come true, she and the others will be chasing Keri-Anne Payne in the final stretch. Anderson will need to draw upon that NCAA championship speed to climb on the Olympic podium.

While Anderson knew open water and its challenges and allure from an early age, it took her a while to find herself back on the shoreline. She initially focused on the pool and developed into a top age-group swimmer emerging and high school star. The fast-improving University of Southern California junior who won her first NCAA championship this year is studying communications – a handy major considering all the interviews she has been giving on her pool and open water exploits. “I love USC. I have grown up here and matured. I have improved every year here under my coaches Dave Salo, Kevin Clements and Catherine Vogt. The Trojans take such pride in their school, from the students to the professors. You can be walking down the street in your USC shirt and people just come up to you and talk. It is like being in a big family.”

And her family will be with her in London. Haley and older sister Alyssa both qualified for the American Olympic Team. Haley will represent the USA in the open water while Alyssa will race in the pool. They are both stoked with the younger sister focusing on the 2-hour marathon swim and the older sister focusing on a 200-meter race that will take less than 2 minutes. “My entire family is going to London; parents, sisters, aunts. About ten people I think,” Haley explained. “We’re so excited to go to the Olympic Village and experience everything the Olympics offers.”

In addition to working out with her sister in the Olympic Team camp, Anderson will fine-tune the little things to boost her medal chances in the lead-up to her 10K race. “My coaches and I are working on my turns, drafting and feeding. I practice with gel packs in my swimsuit during workouts now. I know I have to get better. But I keep learning more and more.”

With the biggest race of her career on August 9th, she has very little time to study. Fortunately, she trains in the most successful swimming program on Earth at USC. Olympians occupy nearly every lane of her workouts with Olympic gold medalists including Rebecca Soni, Kosuke Kitajima and Ous Mellouli. The ambiance of winning is as thick as the color maroon around the Trojan pool deck. With Olympians from 11 countries, Haley is a serious medal contender. “Every year as I get older, I am able to improve more and more. As I gained more experience over the last few years, the possibility of competing at the Olympics became more real.”

And now it is at her doorstep as she and Alyssa pack and get ready to go to London.

Like her Trojan Swim Club teammate Mellouli, Anderson will be racing in Hyde Park in front of a worldwide TV audience and over 30,000 spectators lining the banks of the Serpentine. “Ous works out so hard. He is so confident in himself and tough as nails. We workout together and it is good to have someone to talk to about open water swimming. It’s not easy, but that is what is fun about open water – you can talk about the races afterwards with others. It is important to discuss what happens out there with someone who understand what you are going through.”

Anderson has been through a lot in her short open water swimming career, from being fast-tracked onto the national open water team to completing a 25 km race in cold water (61°F / 16°C) at the 2010 World Open Water Swimming Championships in Canada. With the Olympics in London, the cooler side of the open water plays to her strengths. “I am totally fine with the cold water. It doesn’t bother me.”

Nothing much seems to bother Anderson whose DNA seems grounded in optimism and good-nature. She always emerges from the water – cold or warm, rough or calm, pool or open water – with a big smile on her face. “I’m always happy and I love to race.”

Just eliminate those turns and walls and the hard-working Anderson will be ready to race come August 9th.

Watch for her bright smile at the start … and the finish.