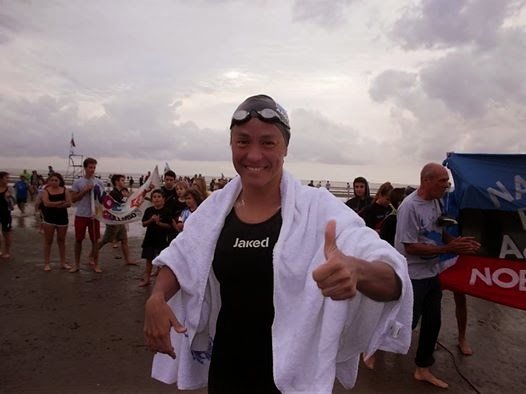 Professional marathon swimmer Noelia Petti of Argentina completed her attempt to swim between the coasts of Uruguay and Argentina on Sunday across the Río de la Plata.

She swam faster than her estimate of 13 hours from the city of Colonia in Uruguay to the Punta Lara in Argentina.

Together with her coach and husband Nacho Grignaschi, she swam 40 km starting at 5:45 pm. As darkness overcame her, the winds and waves created very difficult navigation as she was crossing lateral currents. “The river was rough with big waves and winds,” she explained about her record-setting swim. “The wind gave me no rest. I did not do any specific training for this crossing; the time taken to swim and experience were key to achieve the goal.”

Other swimmers who took between 14 and 19 hours including the first crossing completed in 1923, nearly 91 years ago by Argentina Lilian Harrison at the age of 20.

Nicknamed Dama del Río de la Plata (Lady of River Plate), Petti was escorted by 10 kayakers as she approached the other shore. Her greeting party swelled to 400 people with her mother in attendance. “At first, I hugged my mom.”