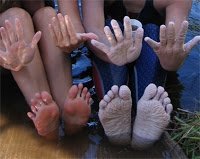 There are marathon swims done in the ocean (by Susie Maroney and Diana Nyad) and rivers (going downstream) that were long – really long.

2. Ted Erikson, an inductee in the International Marathon Swimming Hall of Fame, finished the same 60-mile swim in 37 hours and 31 minutes.

3. Yuko Matsuzaki, a former professional marathon swimmer from Japan, completed a 51.5-mile (83K) solo swim in 33 hours and 25 minutes in Lake Cane in Orlando, Florida on September 13th, 2008. Yuko’s swim can be seen here. Her hands and feet are shown above as an example of Third Spacing