The clarity of the lakes in this area rival any in North America – geological marvels that NEKOWSA will celebrate and promote with its four open water swims in summer 2010.

“We’re very excited by the incredible response we’ve received from so many swimmers, local and from away. Our next goal is to find and build a club house where we can have serious meetings and talk about serious stuff and burn some wood and stuff long into the night,” said Phil. 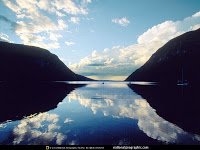 The Association recently announced a 4-mile swim to be held in Lake Willoughby, a beautiful glacier lake, on August 21st to add to the 6-mile Son of a Swim on June 26th in Lake Memphremagog, the 1-, 3- and 10-mile Kingdom Swims on July 24th in Lake Memphremagog and the Even Up Aquaman Triathlon (3.5-mile swim + 35-mile bike + 13.1-mile run) in Lake Salem or Lake Seymour on August 7th.

These open water swimming associations have numerous advantages in the endurance sports world: (1) their event locations are scenic and natural – oceans, lakes, bays, rivers. (2) The challenge and enjoyment of swimming from start to finish in an open body of water is tangible. (3) For some, the autonomy of swimming with hundreds or thousands of swimmers is often less stressful and more enjoyable than standing up on a starting block alone in a pool. (4) The sport embodies camaraderie, being both collegial and competitive at the same time.

Adam Winter, a DOWSSA founder, spoke for many in NEKOSA, JIOWSA, USOWSA, DOWSSA, VOWSA, IOWSA, WOWSA and SOWSA where he explained what he is doing, “We have some very exciting plans in the pipeline that will blow the minds of swimmers and sports fans alike. Our creation is truly an exciting development in the world of open water swimming sports.”