The Making Of Iconic Film Scenes The Making Of Iconic Film Scenes

On the 40th anniversary of the iconic movie Jaws, a Barbadian singer Robyn Rihanna Fenty, better known by her stage name Rihanna, was photographed by Norman Jean Roy for the March 2015 issue of Harper’s Bazaar.

Her interview is posted here.

Like many who saw the original movie in 1975 or its various sequels, Rihanna said, “Jaws freaked me out because I was a beach baby, so every time a new Jaws came out I would take months off from the beach or just sit on the sand. If I happened to get in the water, my dad would hum the theme music, and I was right back out of it. But that was really my fault because I was obsessed with Jaws.”

Those thoughts were echoed by many, especially ocean swimmers or those who thought about swimming far off the seashores around the world in the 1970’s and 1980’s.

When it comes to the movie Jaws and swimmers being attacked by sharks, Susan Backlinie comes to mind. 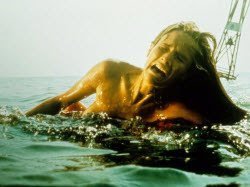 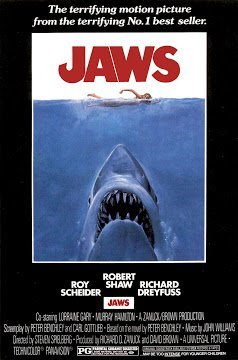 Susan Backlinie was a former age-group swimmer with a good swimming stroke.

Backlinie was also gifted with excellent navigational sighting technique and a streamlined body position in the open water who was famously asked to gracefully run into the ocean and swim well. But her name is not as well-known among the contemporary swimming community as it is in the movie industry.

In the summer of 1975, Backlinie appeared on the promotional poster and as Chrissie Watkins, an ocean swimmer in the iconic opening scene in Jaws. 67 million Americans saw the film during the summer of 1975 and hundreds of millions of film-goers have seen the scene since.


37 minutes into this documentary on the making of the documentary film Jaws below, Backlinie explains the creation of her iconic scene: