Nothing Can Compare In The Bold Step Forward 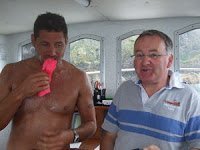 American marathon swimmer Darren Miller, tied for fourth on the global Oceans Seven list, calculated the average crossing of the 21-mile North Channel between Scotland and Ireland as part of his research.