Nothing Is Guaranteed In The Open Water 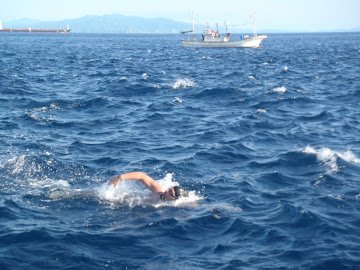 After reading a variety of analyses and comments on the 2013 Manhattan Island Marathon Swim where fewer than half of the swimmers finished (read one comprehensive example here on Freshwater Swimmer), it is clear how advanced the sport of open water swimming has become.

Every year, NYC Swim conducts careful analyses of the tides around Manhattan Island and bases its decision on the precise start times of its races based on decades of its real-world experience and hard data from independent sources.

This is one clear example of the know-how, tools, and capabilities of the open water swimming world in the 21st century. Race directors and escort boat pilots can now, much more often than not, accurately predict and utilize the natural movement of water to the benefit of open water swimmers. Nowadays, race directors and escort pilots can instruct swimmers exactly where and when to start their swims often down to the minute. Augmented with modern-day technology based on a variety of calculations, swimmers are also often directed during their swims to maintain their pace or pick up their pace. In some cases, they are even told to slow down a bit in order to catch tidal flows and currents.

In some races and solo swims, swimmers even utilize scout boats to forge ahead in order to check out currents, eddies, and possible blooms of jellyfish or sharks. This information is radioed back to the mother ship and the swimmer and crew become even better informed as to what to expect and how to react.

With all this technology, know-how, and equipment combined with the increasingly high success rate of swimmers around the world, there is a growing expectation and understanding that swimmers are in good hands. Race directors and escort pilots increasingly have the experience, know-how, and tools to optimize the swimmer’s start time, average pace per mile, feeding stops, and a variety of other elements in order to achieve success.

It was not always this way. Without GPS, without scout boats, without decades of real-world experience, many swimmers and support crews in the 20th century swam without the advantages of modern technology or know-how. If the conditions were not too windy and the tides were not too adverse, they entered the water and made a go at it.

“I am not sure, but we’re almost there” or “Just keeping swimming” or “We have at least another 2 hours” were more likely an attempt of a description of the swimmer’s position rather than the exact distance and specific coordinates obtained from a GPS device.

But even with the advanced technology, improved forecasting, and enhanced know-how, there is always inherent risk in the sport of open water swimming. Nothing should be taken for granted and nothing is guaranteed. Such in the nature of the sport for Mother Nature will always raise her ire at the most inopportune times. She will occasionally ante up the intensity of her storms, shift the direction of her winds, and add lightening to her precipitation. This is where the constant whims of nature can lead to cancelled swims, postponed swims, prematurely terminated swims, and swims that take much longer than expected.

But there is always another day.