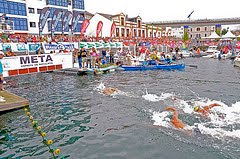 Nacho M. Sela and his colleagues have organized another special edition of the annual Descenso a Nado Ría de Navia this year in Navia, Spain.

In 2011, Navia and its river have been designed to host 2011 LEN European Junior Open Water Swimming Championships.

The competitions will include a 5K race on August 12th, a 3K 3-person mixed-gender team pursuit on August 13th, the world-famous Descenso a Nado Ría de Navia on August 14th.

The Descenso a Nado Ría de Navia is the 54th edition and will be an especially festive atmosphere with a 5K men’s race, a 3K women’s race, a 1.7K masters racs and a 1.1K junior race.

This year’s competition will again be broadcast on live television on Spain’s TPA. the race can be seen throughout the world online here. For those at the venue, the typically close finishes and mass participants can be featured on a giant screen at the finish area.

In a much-appreciated bid to entice the world’s fastest swimmers to join in this world-renowned celebration of open water swimming excellence, Nacho Sela and the organizing committee is offering free accommodation in Navia to swimmers who participated in the FINA World Championships in Shanghai, China. For more information on this offer, contact Nacho Sela here