Nothing Stops The Loveleys Around The Isle Of Wight 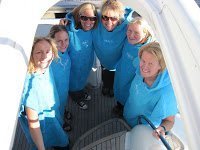 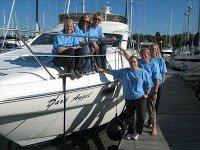 This September, The Loveleys became the first all-female team and only third officially recognized team to complete a marathon swimming circumnavigation of the Isle of Wight.

With Henry Hillier and Alex Rhodes as mariners and Ian Muir and Ian Smith as observers, the steely-determined The Loveleys manhandled the tough 60-mile adventure as they circumnavigated the largest island of England in 17 hours 50 minutes 50 seconds.

Team Manager Kathy Batts explains their route, “We swam anti clockwise around the island, passing the Needles which was incredibly rough where Liane swam. At St Catherine’s Point, which was equally as rough, where Paula and I swam. Rachael did the swim of her life when we got to Bembridge as the tide was very strong and nearly pushed us backwards, but she dug in and got us through this hard section.

This swim resulted in us reducing our time by six hours. If she was 5 minutes slower, the tide would have swept us backwards and we all would have swam for six hours without moving forward. It is here that teams have given up in the past
.”

Kathy and Paula came up with the idea a year ago along with Ian Smith and open water swimming legend Kevin Murphy who planned and organized the event.

Kathy describes their goal, “The swim is considered to be one of the toughest due to the unusual tidal system present in this part of the country. Many teams have started and then not been able to swim through the strong tides and given up. We were totally focused and agreed we were in for the long haul – be it 20 or 30 hours. That was going to be the worst-case scenario, but we wanted to be the first-ever ladies team and nothing was going to stop us.”