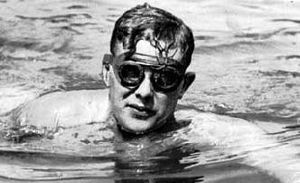 At the British Long Distance Swimming Association’s BLDSA Colwick Park Championships in Nottingham today, one of the most incredible open water swimmers of all time was honored.

Tom Blower (1914-1955) from Nottingham was nicknamed Torpedo Tom for good reason. His career, which was interrupted by World War II where he became a decorated hero, spanned from 1937 to 1951.

The length of his 14-year career is especially impressive given his relatively short life (41 years), the period in which he swam (from the Depression Era through past World War II), and the pioneering swims that he accomplished.

After serving heroically in World War II, Blower did the unprecedented and the unthinkable. In July 1947, he completed the first crossing of the North Channel in 15 hours 26 minutes of the 33.7 km (21 mile) channel between Ireland and Scotland. Since the North Channel was first attempted in the 1920s until 1970, Blower was the only person to successfully cross the notorious waterway.

His post-WWII career continued with a 1948 English Channel crossing from Archcliffe Beach. That 15 hour 31 minute crossing made him second person in history to successfully swim the English Channel in both ways directions. Then in 1951, he swam the first leg of an abandoned double-crossing before he was pulled out in 18 hours 42 minutes.