O’ The Adventure Of Swimming Across Scotland 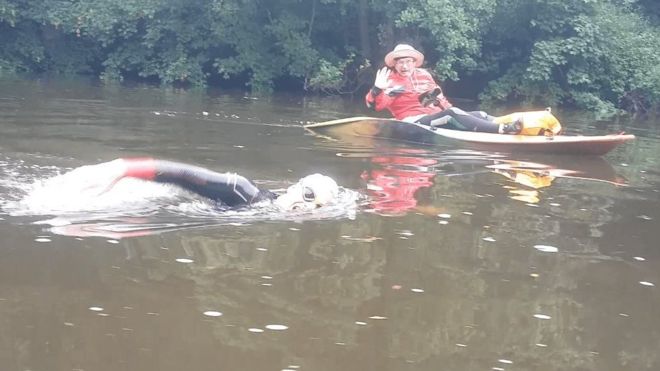 A 25-year-old engineer is a thinking man’s wild swimmer. He has used his creativity to come up with some cool assisted stage swims.

After completing a 240 km solo stage swim along the River Severn in Great Britain, Ross O’Sullivan is back for more.

O’Sullivan is attempting a Swim Across Scotland, another 110 km stage swim starting on August 27th. “The challenge is simple. I aim to swim across Scotland. You can actually swim from sea to sea from the west to the east coast of Scotland, without ever touching land.

I will attempt to swim within 6 days from Fort William to Inverness [as a charity swim] to aid Children’s Hospital in Cardiff.
“

For more information on the Swim Across Scotland, visit here.

Photo above shows O’Sullivan swimming 240 km in 18 days in a solo stage swim along the longest river in Britain, the River Severn from Llanidloes to Newnham, Gloucestershire in June, averaging 18.5 km per day.