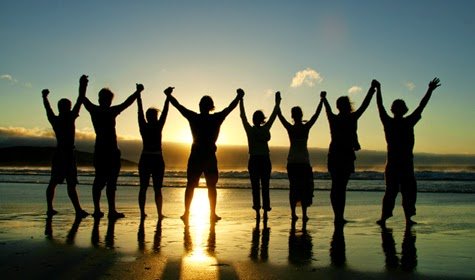 Courtesy of WOWSA, Huntington Beach, California. Over the decades covering swims from the South Pacific to San Francisco, from the Caribbean to the Carolinas, from South Africa to Sandycove, we have seen thousands of swimmers prepare for their open water swims. Along the way, we have had thousands of conversations, conducted many interviews and observed innumerable races and swims. We have conducted surveys and questionnaires and received replies from people of various nationalities and backgrounds. What we find striking is that the issue of prayer, faith and one’s belief or nonbelief in God or a Supreme Being or system in the global open water swimming community seems to be somewhat geographic. In most open water swimming events, faith, prayer and God never seem to come into the equation, at least publicly. Conversely, in places like the South Pacific, Caribbean nations and the American South, faith is never hidden and prayers are publicly said before the start of an open water swimming event. The opening ceremonies are occasionally started by a prayer by a local minister or priest. Swimmers like Stephen Redmond, the first person to complete the Oceans Seven, kneel down and pray intensely and fervently before a swim – and continue to draw strength during his swim through his own faith and prayer. For example, Redmond said during his 22 hour 30 minute struggle across the Molokai Channel, “Never give up…too far to fail…swim Molokai…[a mantra] which I must have said millions of time to myself…along with many prayers to St. Jude…” While there are always exceptions, these differences are interesting to note. It is also interesting to note that in surveys about what swimmers in America think about during their own open water solo swims and races, prayer and faith only occasionally come up in conversation. In survey after survey, American swimmers state they spend their time thinking about their stroke, their pace, or the conditions. They meditate or simply experience random thoughts, but very few open water swimmers publicly talk about saying a prayer or delving into one’s faith before, during or after their swims. Even when things are tough or the athletes delve into dark places due to difficulties, one’s faith is rarely mentioned. In contract, in American professional sports and in pool swimming, there are many athletes who mention their faith, prayer or their belief in God especially in context of their performance on the field or in the pool. Over the course of the next few months, the Daily News of Open Water Swimming will interview and discuss the issue of faith and prayer among the open water swimming community – especially since all open water swimmers spend a lot of time swimming alone with their most private and deepest thoughts. We hope it will be an interesting and enlightening series. If you wish to explain your own thoughts about faith and prayer as it relates to your own performance or preparation in the open water, please send your comments to [email protected]. All inquiries and comments from people of all faiths including agnostics and atheists, are confidentially and non-judgmentally accepted and will be reviewed and reported in this new series. Copyright © 2008 – 2015 by World Open Water Swimming Association