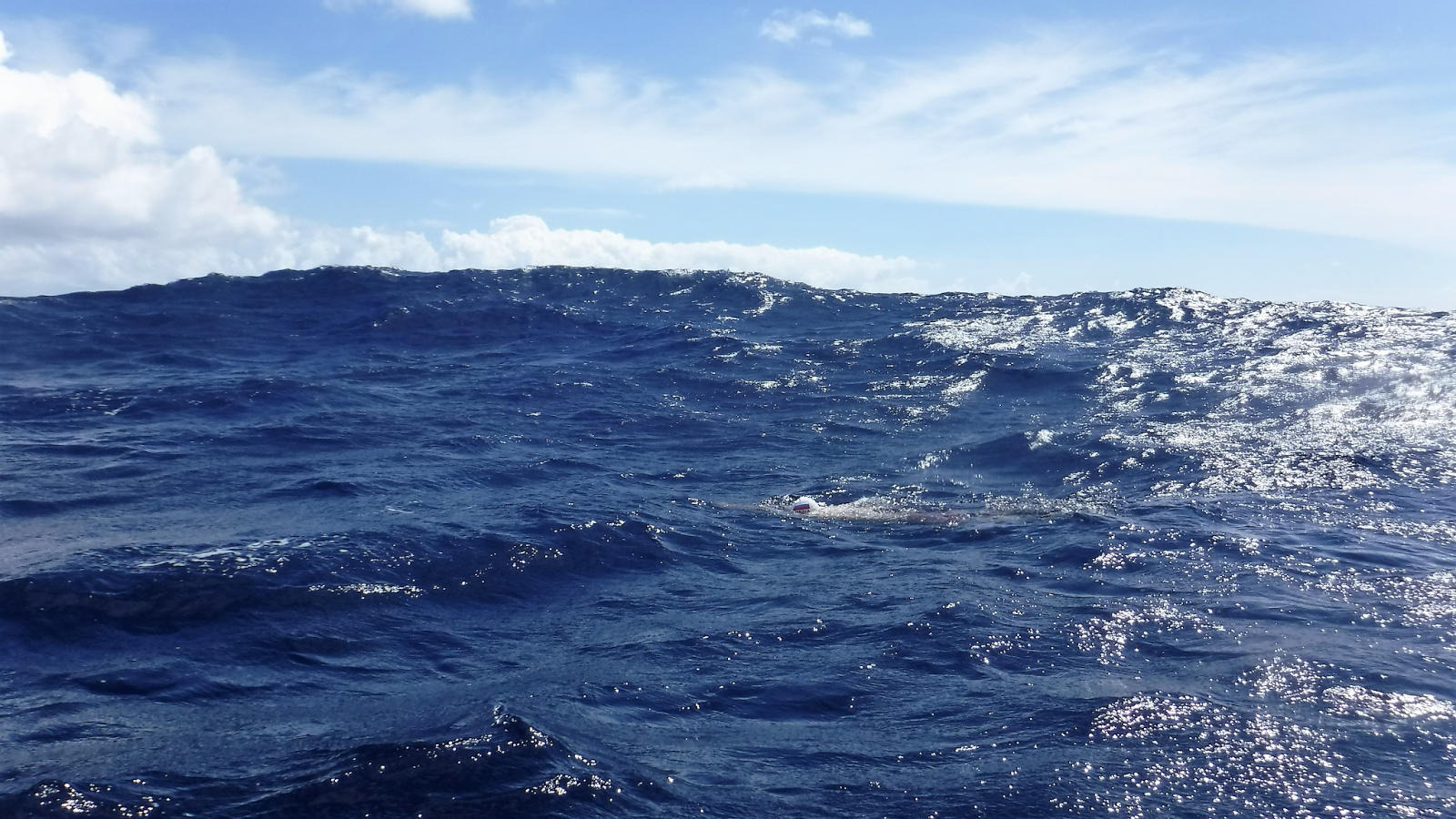 Jeff Kozlovich was kayaking for a relay team from Russia across the Molokai Channel between the islands of Molokai and Oahu in Hawaii last month. The attempt was called due to sharks.

Kozlovich talks about the shark encounter. “Our escort boat tried to scare them away. It didn’t work so the swimmer got out of the water.”

Captain Michael Twigg-Smith recalls, “First, there were two small ones (3 feet) that were docile, almost playful like dolphins. We decided to continue the swim keeping an eye on our new friends. Then after a half hour, two larger Oceanic White Tips showed up (5-8 feet) and they started swimming more aggressively closer to the swimmer. Jeff saw the big one and we called the swimmer out of the water.”

But even though Kozlovich is a professional career lifeguard on Oahu with decades of open water experience, even he did not see the sharks. “Swimmers saw them; everyone on the boat saw them, but I did not. The rough water conditions and glare make that perspective right on the water almost impossible to see the sharks. But I did see the oceanic white tip sharks when I got on the boat.

What both the boat pilot and I tried to do was circle the swimmer while I was trying to get to a position where the glare wasn’t so bad. The first few sharks were small, about 3-4 feet [in length]. It is not something we would instantly stop a swim for. But then a 8+ foot shark showed up and started darting at the swimmer – the swim was over and the swimmers was out of the water.”

Kozlovich always has a conversation with the swimmer before a channel crossing in Hawaii. They talk directly and honestly about the sharks out in the water. “The swimmers responses range from sensible to insane. I’ve heard comments like ‘I want to get out as soon as possible’ and ‘Don’t tell me if you see one’ to ‘I’m not getting out so I don’t want to know’ and ‘Don’t touch me unless it bites me’.”

But Kozlovich is brutally honest about a nightmare situation. “There are many scenarios where no one would know until a bite happened. As a kayak guide, I cannot guarantee your safety from sharks. I have a lot of experience and I’ll do my best, but what I can do is very limited. Basically we want you to swim to the boat quickly and smoothly and get out.

Swimmers should not try to get on the kayak. That will only result in one big splash and both of you in the water.”

Harry Huffaker, one of the most prolific Hawaiian Isles channel swimmers, agrees. “The main job for the kayaker is to provide close cover and proper direction for the swimmer with ideally a very close relationship as a bodyguard”, cheerleader, and communicator. On my first [13 hour 35 minute] Molokai crossing in 1967, sea kayaks had not yet been invented or at least considered. The flavor of the day was a paddler on a surfboard. When the sea state became ‘dodge’, the best solution seemed to be to employ the leapfrog approach, with swimmer and paddler preceding along and escort boat periodically overtaking them and confirming proper course before advancing to take the lead position and wait for swimmer and paddler to catch up and take the lead.

If and when a surprise might be encountered, swimmer could exit the water by throwing themselves across surfboard. The ultimate decision rests with the swimmer or designated decision maker – limited to one person to avoid confusion, arguments, etc.

Different swimmers have different personalities with regard to risk on versus risk off positions. On my Oahu-to-Molokai swim, a menacing shark appeared a few hundred yards from shore. After nearly 16 hours in the water, I decided it was either the shark or me. Admittedly, the endorphins and adrenalin were in plentiful supply which prompted a somewhat less-than-rational decision on my part. More luck than smarts.”

Above is a photo of the Team Russia swimmer in the Molokai Channel. The shark following three feet under the water and eight feet back of swimmer. Kozlovich asks, “See it? Of course you don’t.”