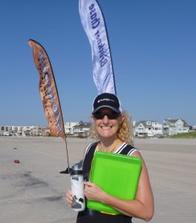 Every triathlete is an open water swimmer although they may not view themselves as one.

As the triathlon community continues to grow and share the open water with their more aquatically-oriented colleagues, the ocean and lakes still remain a huge obstacle that many new triathletes must overcome.

Since his first Ironman-distance triathlon in 1985, Bruckner Chase has been helping triathletes enjoy and appreciate the dynamics of swimming in the open water. Now he and his wife Michelle Evans-Chase will help more women find their place in the open water as they also bike and run to their first triathlon.

The Chase’s New Jersey-based Ocean City Swim Club received an inaugural Women For Tri Triathlon Club 2016 Grant supported by the Ironman Foundation and Life Time. “We will help more women reach their potential in the water and on land as triathletes. In the coming winter months the Ocean City Swim Club will host special Pool Open Water training sessions as well as classroom seminars by female experts in fields related to physical and mental training for triathlons.

When the South Jersey waters thaw the club will take athletes into the open water for both swimming and prone paddleboard women only sessions to let them develop the balance, power and peace that will positively impact every phase of their triathlon experience.”

Women For Tri, an initiative supported by Ironman and Life Time, announced the following 24 recipients and 5 collegiate triathlete scholarships, averaging US$2,500 per grant, for the 2016 Women For Tri Triathlon Club Grant and Collegiate Scholarship Programs.

Women For Tri 2016 Triathlon Club Grant Program was established to support local triathlon clubs as they develop programming and activities to increase female participation in triathlon. Participating clubs will utilize funds to provide specific training for women triathletes with a focus on removing barriers to participation, educational programs for women triathletes, and networking and social gatherings with a focus on recruiting and engaging women to participate in triathlon.

“It is an absolute honor to be able to further women’s initiatives in our beloved sport through Women For Tri,” said Christine Schirtzinger, Founder and Co-Lead ambassador of Girls Gone Tri, a grant recipient in Illinois. “We are absolutely thrilled for the opportunity to reach more women, better support and educate our current members and learn and grow through the opportunity Women For Tri is so kindly giving us all.”