An Ocean Swimmer Fighting Back 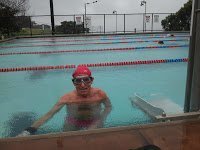 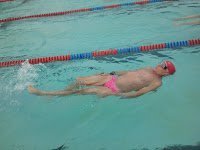 Doug Rice has been one of the fixtures of the ocean swimming community in Hawaii since 1975.

Always smiling, always up for an ocean swim no matter what the conditions were, the college educator was the ideal teammate and supporter of ocean swims. A fixture at the morning Ala Moana Beach Park crew near Waikiki, he and his partner Christine Andrews were at every group workout and local ocean event on Oahu. After 14 years working and swimming all over Honolulu, he and Christine moved to Maui in 1989 where they have continuously taught at Maui College.

But his world of education, the marine environment and swimming came to a screeching halt on January 21st this year. On a glorious Maui morning with characteristic rainbows over in the distance, Rice was cycling with his training buddies. After a tough ride up the volcano on Maui, he and his workout partners were coming down the narrow road. Being stronger in the water than his cycling buddies, Rice fell behind and was cruising down behind his friends.

In a split moment that he will never forget, he came barreling down the mountain hugging the guardrail closer than normal. The last thing he remembers is seeing his tire spin out on loose rocks as his tires were at an angle near the edge of the road. He yelled in terror to his friends.

The next thing he knows, he wakes up in the hospital.

His friends told him that he flew over a guardrail down a steep ravine where his fit swimmer’s body was treated like a pair of socks in a dryer. Tumbling down the mountainside made of eons of lava rock, Rice had no chance. His momentum took him over the guardrail where he hit repeatedly sharp lava rocks. The sound of bone hitting hardened lava is terrifying. Fortunately, he lost consciousness, but he badly broke his left femur, shattered the bones in his right hand, severed his left collar bone and left shoulder, and cracked four ribs on his left side. To make matters worse, one of the broken ribs punctured his left lung causing a collapse of his lung. Besides the internal injuries, his body was a pocketed with head-to-toe of bloody scrapes, bruises and cuts. Wounded beyond recognition, his friends called for help and he was medevacked to a local hospital.

In a fighting spirit that is characteristic of the lifelong swimmer, Rice jokingly laughed how one gash in his cheek left a scar that blended in with his smile, “so no one can really tell it’s there.” After recovering in the hospital on Maui for ten days, he spent another 20 days in a rehabilitation center. Physical therapy started in the hospital, including simple things such as learning to stand on one leg and getting in and out of bed.

Weakness was the foreign feeling Rice was unfamiliar with. “I was really weak from the operations on my shoulder, hand, leg and lung. A metal rod replace the broken femur, pins were inserted in my hands, and a metal plate placed along my collar bone made it really difficult to do simple tasks with ease. Just normal crutches wouldn’t do. Since my left shoulder was in a sling with my right hand was completely shattered, a special type of crutch was designed so I was able to get around on my own. A walker wouldn’t even suffice since my thumb and index were broken, and the three other fingers were splinted together.”

But swimming was where he came from – and where he returned.

He started off simply, only kicking in a pool in Pukalani, Maui. Lowered in the water, the joy he felt floating on the surface was palpable. With that characteristically wide smile of his, the Rice of old was back.

Six months after his accident, he gains more and more strength and wants to keep ocean swimming. His ocean-swimming friends have helped him back on his long road to recovery. Swimming is a lifestyle rather than just a way to stay in shape. He continues his recovery and rehabilitation in the pool during the week, but it is more for convenience. It is the weekends that he really enjoys getting back into the ocean with Christine and their friends.

Their favorite place to swim is the Makena region on the southern coast of Maui. “An ocean swim is never dull; we swim over and with sea turtles, dolphins, manta and eagle rays, eels, and sometimes gets to see the less visible sea life such as sea horses. One of our sea friends, affectionately named Bruce, is a white tip reef shark. Sometimes he comes up to us and swims underneath us.” Does he ever get scared or swim to shore? “No, Bruce is a nice shark and a bit shy. Bruce shares a cave with a turtle. He likes his fine dining; we sometimes see leftover carcasses of lobsters whenever he is around.”

Rice and his merry group of Maui marathoners like to swim at a place called Slosh. “There is two rock walls facing each other with an opening in the front and back. The water fills up really high, and you can allow yourself to get carried into it. Out you go on the other side where it almost forms a waterfall.” Fearless even with a broken body, but comfortable in the ocean, he also like to jump off a tall rock, about 20-30 feet by the Slosh.

He knows that he needs. “When a swimmer gets into an accident or experiences an injury, the best therapy is swimming. You always have to start out with whatever it is you can do. When I first got back into the water, I was lowered in the pool with the chair. When I was in, my first thought was now what? I tried kicking, but I couldn’t turn to breathe. I turned over on my back and kicked this way.” Next, he tried sculling despite having his arm in a sling. After weeks of effort, he was able to get back to regular sculling and stretch his body just a little bit more. “Things can only progress,” he says with a smile and wink. 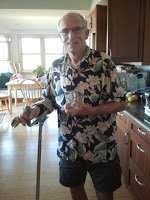 A half year into his recovery, he was able to use a kickboard the proper way, with both arms completely extended in front holding the board. “This was a big deal.” He is able to swim regularly now, but still has to warm up using the kickboard to begin his workout so he can get his body slowly moving. “Everyone’s injuries are different, and you just have to start getting more movement and exercise to get the heart pumping to get stronger and heal faster.”

At the age of 67, his doctors told Rice he healed remarkably fast for his types of injuries. But he adds that, “being an active swimmer, as well as trying to be safely active as a form of recovering is going to help anyone recover faster than expected.”