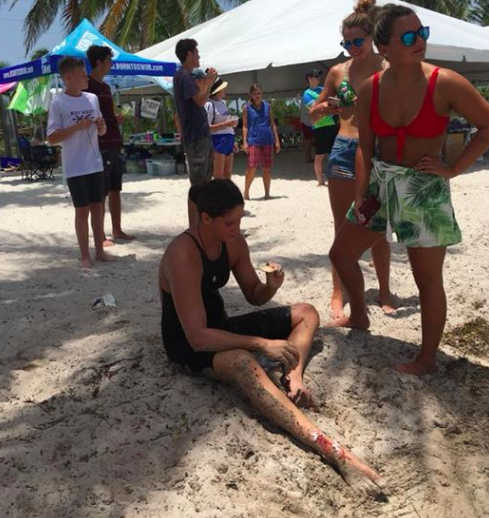 Océane Peretti is a French swimmer from Hyères who is currently one of the co-captains at the Florida International University swim team.

Despite cutting her leg during the race, she won yesterday’s 12.5-mile Swim Around Key West in 4 hours 5 minutes. She talked about her swim, her second consecutive marathon swimming victory (after winning the Swim Miami 10 km in 1 hours 58 minutes on May 6th):

Daily News of Open Water Swimming: When did you start open water swimming: in France or at Florida International University?

Océane Peretti: I’ve started open water swimming in France, but I never went over 5 km and it usually was at the beginning of the season as a funny way to begin a new season and get back in shape. It’s only this year that I seriously worked hard toward the goal of being an open water swimmer here at FIU.

Daily News of Open Water Swimming: What was the longest swim you did before the Swim Around Key West?

Océane Peretti: Before Key West, the longest race I’ve done was the 10 km of the Swim Miami event, which I won overall men and women as well. But with my coach Randy Horner 2 weeks before the race day, we went out in the ocean for a total of 3 hours 30 minutes to make sure I was used to making an effort over such a long period of time.

Daily News of Open Water Swimming: Do you want to do other marathon swims in the future?

Océane Peretti: For now, my first goal is to recover from Saturday; the hot conditions were tough to handle. I was pretty dehydrated afterwards; it took me an hour to be able to stand up. But maybe, who knows next year you will see me again at the start of the 43rd Swim Around Key West.

Daily News of Open Water Swimming: France has so many open water swims and many successful open water swimmers on the international scene. Do you plan to continue swimming after graduation from FIU?

Daily News of Open Water Swimming: What did you eat and drink during the Swim Around Key West?

Océane Peretti: With my coach, we agreed that eating was not a good option because my stomach does a poor job when I am in the middle of an intense effort, so we decided to use electrolytes drinks mixed with water. But next time if any, I will probably adjust and add more water to make sure I am correctly hydrating during the race to avoid the last 2 mile crash I’ve experienced on Saturday.