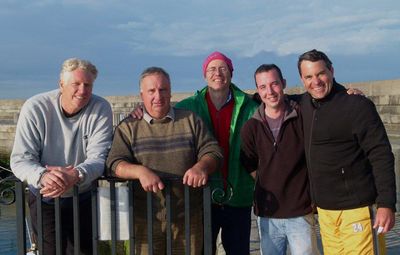 The Oceans Seven is an open water swimming challenge that has attracted the attention of some of the world’s greatest channel swimmers.

While the quest to achieve the Oceans Seven is a challenge that is reserved for the most committed individuals, relays can provide an enjoyable alternative.

Currently Chris Kraus, Brian Ross, and Rick Gaenzle are a 3-man team that is en route to complete the Oceans Seven relay style.

The trio has already completed a North Channel relay crossing (Ireland-Scotland), a Strait of Gibraltar crossing (Spain-Morocco), and an English Channel crossing (England-France), and are getting ready for their fourth Oceans Seven channel: the Tsugaru Channel in September.

While the trio of Americans is going after the traditional Oceans Seven, there may be other Oceans Seven-type relay options for pods of swimmers around the world. There are all kinds of established relay locations and competitions to choose from: