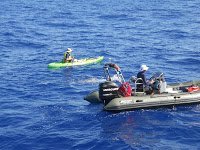 Stephen Redmond stepped up to the plate in Japan and achieved the Oceans Seven on his fourth attempt of the Tsugaru Channel.

Now history is ready to be repeated when Penny Palfrey steps up to the plate in the North Channel and attempts her final swim in the Oceans Seven.

One of the most popular open water swimmers in the world will soon set foot in Ireland and immerse herself in the rugged nature of sea swimming in Ireland.

While the logistics and planning of her Cuba swim were daunting, she will have plenty of assistance in Ireland in the hopes she joins the small and exclusive fraternity of the following conquerors of the North Channel:

While she will turn her attention to the notorious channel between Scotland and Ireland, she has plenty of experience in cold water – including a 10 hour 36 minute crossing in 13.5°C (56°F) water in the Catalina Channel – and with jellyfish, from Hawaii to Florida.

Even though Palfrey will be one of the oldest swimmers to attempt the channel (50 years old), she will also be one of the speediest and has an excellent shot at becoming the first women to complete the Oceans Seven.