Odaiba Marine Park Getting Ready For 2016 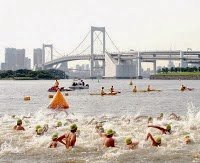 Odaiba Marine Park Getting Ready For 2016

In preparation for the Olympic 10K Marathon Swim at the 2016 Tokyo Olympic Games, one of the world’s most densely populated and smoothly running metropolises is hosting open water swims at its marathon swimming site.cities

The short bay swim was held in Odaiba Marine Park near the heart of Tokyo where the proposed Olympic marathon swim and triathlon events will be held.

In a translated statement, Shibata said, “I’m thrilled to join fellow Olympians and all of the motivated people participating in the swim. Odaiba’s beach is a stunning backdrop for the event and together with Tokyo’s passionate sport fans, we look forward to cheering on the elite athletes who will compete here in Tokyo.”

Dr. Suzuki who is now president of the Japan Swimming Federation said, “I am delighted to see hundreds of passionate sports enthusiasts watching and taking part in swimming at Odaiba. I believe that Tokyo 2016 will provide an incredible stage for memorable performances, and am greatly excited by the prospect of seeing world-class athletes competing here in the 2016 Games.”

Odaiba is a large artificial island in Tokyo Bay across the Rainbow Bridge from central Tokyo. It was initially built for defensive purposes in the 1850s, dramatically expanded during the late 20th century as a seaport district, and has developed since the 1990s as a major commercial, residential and leisure area. There were initially a series of six island fortresses constructed in 1853 for the shogunate to protect Edo (modern-day Tokyo) from attack from the sea, the primary threat being Commodore Matthew Perry’s Black Ships which had arrived in the same year. Daiba in Japanese refers to the cannon batteries placed on the islands.

From Stari Grad To Serpentine, European Open Water Swimming Is Back