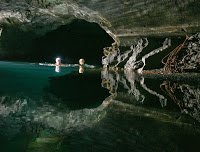 Colin Hill is known to be willing to swim anywhere anytime. Warm or cold. Smooth or rough. Fresh or salt, Colin can gear up for any open water swim.

Or underground swim, even if he is warned not to do it.

For the first swim of 2012, along with his girlfriend, he planned unusual New Year’s Day swim. “I was in Wales near Snowdon and he had to be guided down into an old slate mine. It was about 1 kilometer along a mining shaft to a small lake.

Despite the warnings from one local that ‘we had two minutes to live if you fell in it’, it was good swimming. We went in with a head torch, helmet and swimwear into a pitch darkness and inky black water
.”

Colin also tells of a swim he did with Outdoor Swimming Society founder Kate Rew. “We once went to check out a tarn on the moors which was said to have a mermaid and was bottomless. It was surrounded by a small boggy smelly marsh, so I guess not many people did actually swim in it. I was disappointed that there was not a mermaid to take me down to the depths to live forever as a merman and that, despite all the local legends, the water it was only 8 feet deep.”