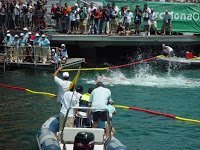 Officiating the Olympic Marathon Swimming 10km is one of the most difficult jobs in the world of sports.

This article is part of a lengthy series on officiating in the open water swimming world. Stay tuned for more in the build-up to the Olympics.

The degree of difficulty for open water swimming officials is related to visibility, interpretation, judgment, rule ambiguity and immediacy.

Visibility
Like the game of water polo, many – if not most – of the infractions are done underwater. Infractions are simply extraordinarily difficult to observe. Did Athlete A pull on the feet of Athlete B?

Interpretation
Not only is the visibility a major issue for referees, but so is the range of interpretation. Did Athlete B veer into Athlete A? If so, how much? How much is too much?

That is, punching another athlete with a closed fist is definitely judged to be unsportsmanlike conduct, but what about repeatedly tapping on their feet or occasionally pushing down on their legs or throwing an errant elbow? In the case of Natalie du Toit, the amputee world-class swimmer, when other athletes pushed down on her legs, this caused her to completely upset her forward momentum and equilibrium…but it was not called.

Judgment
Very very few officials in a major international competition give yellow cards or red cards around a turn buoy. Even when – or especially when – a large group of athletes come swimming around a turn buoy in close proximity with one another, there are obviously legs pulled, arm strokes disturbed, positions lost and positions gained, and elbows thrown. But because it is so difficult to identify an aggressor and a victim, whistles are not blown and yellow cards and red cards are not given.

Immediacy
Things happen quickly in every sport. Officials have to make split-second decisions when two athletes collide or a ball is moving quickly. Officiating is always hard. However, open water swimming officials are on a boat in a dynamic marine environment overseeing sometimes as many as 50-60 swimmers in a huge pack.

Things happen in every sport, but when athletes know that officials cannot observe every action (or reaction) throughout the entire race. Officiating becomes less of an issue and more of a game of hit-and-miss as the officials will miss much. The athletes will look for opportunities when the officials are NOT looking in their direction.