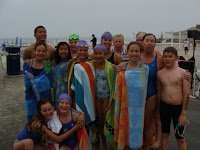 Terry cloth is a highly-absorbent fabric that has so many uses for the open water swimmer. Used to dry off, cleaning, wiping off sand, Vaseline or lanolin, sitting or lounging on the sand or ground, terrycloth is arguably the most essential material for aquatic athletes.

It can be manufactured by weaving or knitting. The length of loops determines how much fluid is absorbed by the cloth. Longer loops provide more surface area to absorb and come in contact with the water.

Rectagular-shaped terry cloth towels are also used for privacy while ‘deck-changing” or changing in or out of one’s swimsuit or clothes in a public area, or for wiping sand from the body or objects.

In contemporary times, swimmers often use towels with colorful designs or team or sponsor names printed on them – and some of the best-organized swims give towels away to their participants at the end of the race.

While marathon swimmer Forrest Nelson once requested a dryer installed on the Catalina Channel escort boats for relay swimmers. Imagine the nice feeling of a warmed towel after an hour dip in the cold water at night?!?