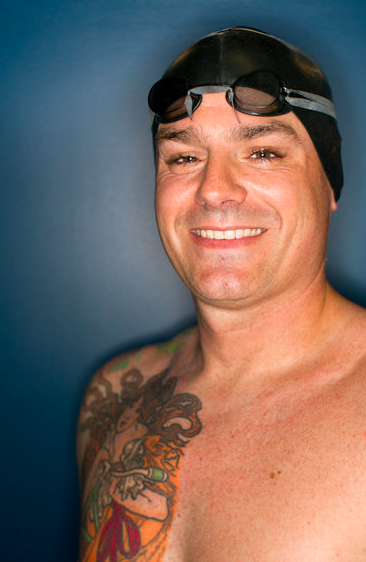 When Frederik Jacques set a new breaststroke record crossing the English Channel in 13 hours 31 minutes in 2005, he broke the record of a fellow breaststroker from Belgium, Patrick Ghysel (14 hours 42 minutes).

On the other side of the world, American Jason Lassen from Oregon [shown on left] completed a 32.3 km Catalina Channel crossing doing breaststroke in 15 hours 59 minutes in 2010.

The breaststroke Catalina Channel crossing was a real old-school swim where Lassen replicated the 1927 breaststroke crossing of Henry Sullivan in 22 hours 45 minutes.

Lassen’s swim was done under similar conditions as Sullivan faced in 1927. “I wanted to break his record fair and square so I swam without GPS navigation. Captain Pittman had to navigate with a compass and line of sight. He did a great job of it too. It was not straight, but it was pretty near.”

Lassen’s record was later broken in 2017 when Philip Yorke swam breaststroke across the Catalina Channel in 15 hours 52 minutes under traditional GPS guidance by Dawn Brooks and Dan Simonelli.

Two veteran breaststrokers include Kshitindra Chandra Baisya from Bangladesh and Dr. Gábor Szentpály, a professor from Hungary who started doing breaststroke marathons after the age of 40.

Kshitindra is a member of the 24-Hour Club with multiple breaststroke marathon swims: