Le Marathon du Saguenay was a 45 km professional marathon swim held on the Saguenay River from Chicoutimi to Bagotville in the Saguenay–Lac-Saint-Jean region of Quebec, Canada. The event was sanctioned by the World Professional Marathon Swimming Federation in the 1960s and 1970s. 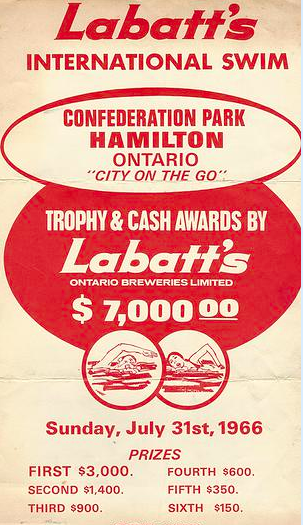 The C$3,000 first place prize in 1966 is approximately worth US$16,518 in 2015 American dollars – which would be a very welcomed cash purse among contemporary marathon swimmers.

The professional event was once a setting for a 1969 Sports Illustrated article about Diana Nyad. Here is the excerpt:

“…Diana Nyad stood in the midst of the world’s best marathoners on a Lake Ontario beach [in Canada with] 17 men and three other women. The Labatt’s International Ten-Mile Marathon Swim was about to begin, and Diana Nyad was entered. “Just to see what would happen,” she recalls. “The gun went off and we were still on the beach. We had to run down and dive in. I don’t know why. It wasn’t a track event, but I had to battle my way to the water. I wanted to swim, not wrestle.”

Which showed how little she knew about marathon swimming.

She learned fast. Two Egyptians swam annoyingly close, taking advantage of her wake. One was Abdul Latif Abou-Heif, The Crocodile of the Nile, and he and his countryman tagged along for a few miles before she shook them. Diana eventually came in 10th and set a woman’s world record for 10 miles—4:23:00. She also won $400 as the first woman finisher.

[Regarding the next pro race on the marathon swimming circuit,] Chicoutimi…aaaaagh! That is the sound the winners make. The losers…. On second thought, even the winners at Chicoutimi are losers. (Which, in a perverse way, if suffering is a virtue, as it often seems to be with marathon swimmers, also makes the losers winners.) About 28 miles all told, the course begins at Chicoutimi, heads down the Saguenay River for 18 miles, then parallels two or three miles of tidal, rocky shore that each year leaves a few swimmers looking as if they had been keelhauled. It is either that or the rips, a meeting of currents off the rocks that at certain tides looks like one of those miniature basins they put toy ships in when they want to film a real storm at sea.

Those who make it by either the rocks or the rips enter a big bay—which, for no reason that leaps to mind, is called Ha! Ha! Bay—with more unpredictable tides. Seven miles up the bay is Bagotville—the finish.

In 1969 the 22 best marathoners in the world started the race. None finished. Chicoutimi did not seem the right place for a pretty young girl who had never swum more than 10 miles. Diana Nyad would need a good boat, and plenty of Coke, hot chocolate and aspirin.

It didn’t work out that way. In fact, nearly all the boats got lost in a storm the night before the race, including the one assigned to Diana. Replacements were reportedly on the way, but they would not arrive until hours after the start, and on the pier a friend was consoling Diana, when suddenly she was swimming. “The gun went off,” she said later, “and I wasn’t going to just stand there.”

A few miles out she nearly swam ashore. There was no boat to guide her, and she had this thing about goggles; she wouldn’t wear them, despite a popular theory that it is always good for a swimmer to know where she is going. (Her trainer, Buck Dawson, says: “I’ve never known Diana Nyad to back down, to admit she was wrong about anything, even when she was.”) Four and a quarter hours into the race, 14 miles downriver, Dawson caught up in a boat. It had been a long time to go without nourishment. “You’re in second place,” he yelled, and handed out hot chocolate and aspirin. Argentina’s Horacio Iglesias, the world’s best marathoner, was in first; Diana was two miles ahead of the third-place swimmer.

She and Dawson chose to avoid the rocks and enter the rips. It was a mistake. Six miles from the finish she swam for an hour on a tidal treadmill, getting nowhere. The tide would not change for hours, and if she started resting—treading water—she would have been swept toward the Atlantic Ocean.

Other swimmers began catching up, saw her plight, took the rocky route and rode a current that swept them safely into the bay. After nine hours Diana had to be hauled, protesting, into her boat. Iglesias had not done much better. At 27 miles he too had been dragged from the water and rushed to a hospital, unconscious. He was fed intravenously for three hours. For the second straight year, there had been 22 starters. This time three of them finished…

Some of the most competitive Canadian National Exhibition (CNE) races were billed was as the Championship of the World.

The CNE races attracted the world’s toughest professional marathon swimmers to compete in a variety of distances in and across lakes in Canada including George Young who won the CNE Marathon Swim held in 1931. 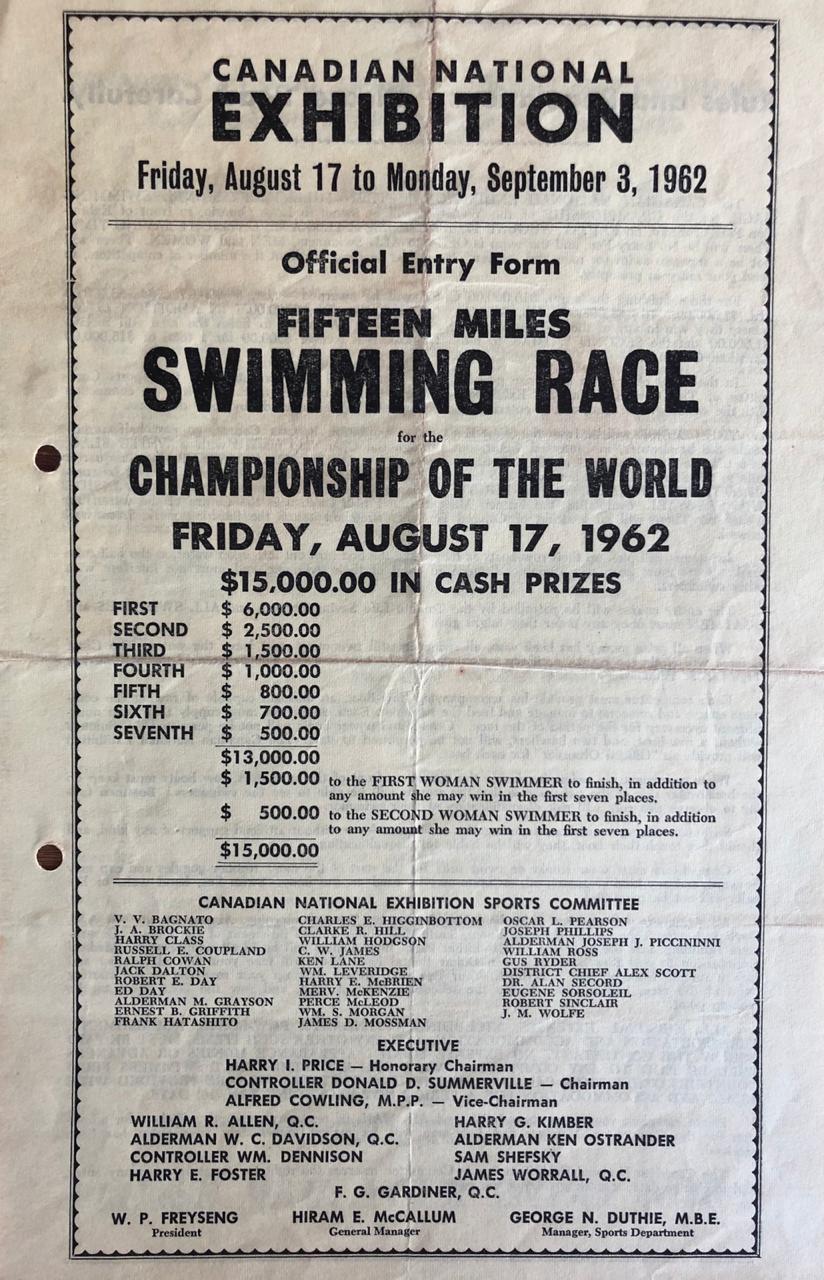