The event is held on the Swartkops River at the picturesque village of Redhouse, some 10K outside of Port Elizabeth in South Africa.

The inaugural race with 48 swimmers was held in the river at Redhouse in January 1924 and has continued uninterrupted with only the exception of six times since then.

World War II led to the cancellation of five races between 1941 and 1945 and then again in 1971 the race was unexpectedly cancelled due to flooding of the river.

Prior to 1987, the women swam a quarter mile, but since then both genders have been doing the complete race.

This quarter mile race was first mentioned in 1932 and again in 1948 when it was won by Joan Harrison, the Olympic swimmer from East London, then aged twelve. 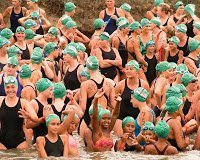 Its former winners include South African Olympic pool swimmer Ryk Neethling (1994) and Olympic 10K Marathon Swimmer Chad Ho who is the defending champion from 2009 and 2010. But it is local Port Elizabeth swimmer Velia Janse van Rensburg who apparently knows the Swartkops River waterways the best as she has won the women’s race a total of times, including seven in a row between 2002 and 2008.

With the Damme-Brugge Swim in Belgium celebrating its 100th year, the La Jolla Rough Water Swim near San Diego, California nearing its 100th year, and the Xstrata Nickel Swim Thru Perth in Australia on its 92nd year, these swims are truly Old School.

We are sure the next 100 years be twice as exciting for swimmers of all ages, abilities and backgrounds.