Ollie Signorini Rips A Good One Into Freshwater Beach 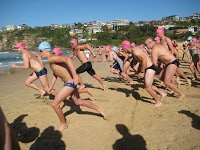 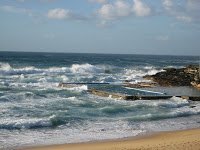 The original course, scheduled to run from South Curl Curl to Freshwater Beach along the spectacular rock cliffs, was rerouted to a loop within the safe confines of Freshwater Beach.”

With typical Australian skills and bravado, the 2+ meter high surf and strong rip currents failed to deter many of the entrants and all 119 of the starts who braved the conditions finished.

Ollie Signorini, a local from North Curl Curl and just over the 14 year old age limit, thrived in the difficult conditions. Effectively using the rip on the way out, Signorini set an early lead together with 38-year-old American, retired professional triathlete, Todd Menzel. But Ollie was able to out-surf his American competitor into the finish.