Olympic Heroes In The Open Water 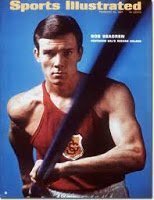 We were humbled by several sights at the 2010 Pan Pacific Swimming Championships 10K race at Marine Stadium in Long Beach:

Double Olympic medalist Bob Seagren of Run Racing waking up at the crack of dawn and hauling floating pontoons, moving boxes and climbing scaffolding to set up the course. Humble and hard-working, the Olympian knows the heights that athletes must climb and he does his best to help the next generation achieve success.

Jim Montrella, one of the most renowned Olympic coaches of all time, cheering on the competitors and offering his boat to escort open water swimmers during future training sessions. 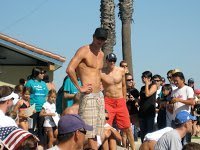 Kosuke Kitajima of Japan looking concerned about his shivering teammate Yumi Kida who was not used to the cool waters of Marine Stadium in Long Beach, wondering what he could do.

Heroes in the field of play – or heroes onshore – the sights on the Olympians helping at the Pan Pacs was impressive to observe.

Photo of Michael Phelps onshore during the 10K race by Lucy Johnson.